Lets Eat Some Seafood On Day 1 In Marco

After breakfast and a walk on the beach, the ladies headed for the pool and I opted for the condo balcony in the morning shade. After getting their fill of poolside sunning, they got cleaned up and we headed off to our favorite seafood place for a late lunch. But being a sports bar, it was packed on Sunday afternoon, as I feared it would be. So we drove on down the road to the Snook Inn, which is a place we’d been wanting to try – things worked out perfectly. The restaurant is right on the waterway entering the marina and in the original part of town – Old Marco.  Marco Island was originally settled in 1870 by W.T. Collier and not really developed until the 60’s when brothers Elliott, Robert, and Frank Mackell bought nearly all of the land from the Collier estate for $7 million – a couple of nice homes cost this now. They laid out a great plan creating, via many canals, about the maximum number of lots on the water. I can only imagine how much money these guys made by developing Marco.

Anyway back to lunch – I took along my camera but forgot to take it into the restaurant. Check out their website for better shots than I would have taken anyway. I ordered an onion ring appetizer for the table, a dozen raw oysters for my meal with a beer and the ladies had coconut shrimp and fried grouper fingers. Surprisingly, raw oysters are available but not fried ones – same thing happened in Nawlins. The oysters were $13.99 for the dozen - wow – I remember when they went from 10 to 15 cents an oyster. I guess this is a classic example of supply and demand and if I lived here on clean water, I’d sure have my own oyster bed. But this is Marco Island after all and we were open air overlooking the water, so tip included lunch was $60 – wow again – it’s a nice place to visit, but I couldn’t afford to live here.

I like to eat the local fare, but we had to bring along a little East Tennessee for breakfast on day 2. We used frozen biscuits, but when you put some Bentons country ham, Cabot cheddar, and home grown tomatoes or an egg fried in the ham pan between them, they were outstanding. 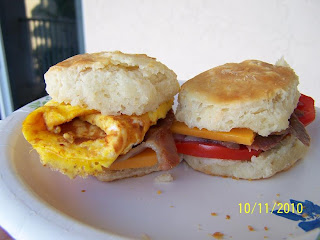 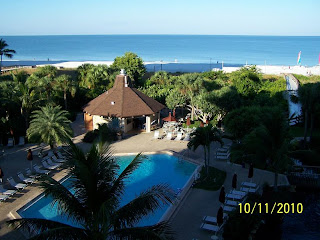 Have a good day and thanks for stopping by.