I did this post before Bev got home with a camera.

While freezer arranging the other day, I found a nice piece of pit beef – in this case eye of round – that had been smoked to an internal temp of 125, making it a nice medium rare. My thought was I could have a couple of sandwiches from it while Bev was gone, but Daughter, Wende, came by for dinner and I decided to have it. I had some buns, the beef, a big pot of beef broth from my broth making event and I had just seen a Diners, Drive-ins, and Dives show where they made a roast beef Po Boy and claimed it was the best on the planet. So I decided to make gravy from some of the broth, slice the beef thin, and bake them in a 275* oven for a couple of hours or so, which is how the DDD place did it. After the gravy was made it occurred to me that I should have used cajun spices to make it rather than my usual.  Fortunately, Wende had her cell phone to make a shot. 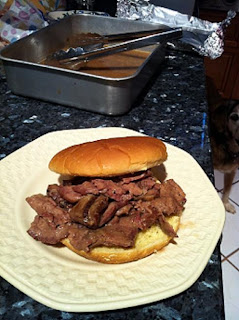 It's hard to beat good smoked beef, cooked in gravy, and a little mayo for a fine sandwich.
Have a great day and thanks for stopping by.
Larry
Posted by Big Dude at 5:40 AM