﻿
After a long, hot, dry summer, my favorite time of the year has finally arrived – although somewhat unusually. In the spring, it seems as though we quickly went from winter to summer without much time with temps in the 70/50’s range. Here we are in the fall with the same thing happening – 10 days previously, it was in the mid 90’s and this past Sunday, it was 61/41. But we usually have a nice Indian Summer in late October.

I carried the camera on a walk the other morning and snapped a few fall plants. This is a little Golden Rod. 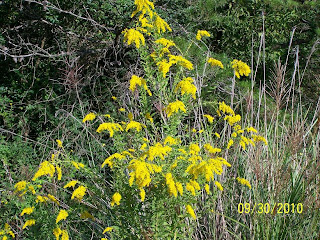 Don't know what the little lilac flowers are, but they are pretty around the Golden Rod. 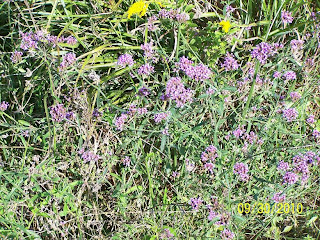 The tree is not as full as usual as evidenced by the low number of seeds on the road, but this is a persimmon about to be ripe.  Since there are two trees in the area, I wish we were big fans. 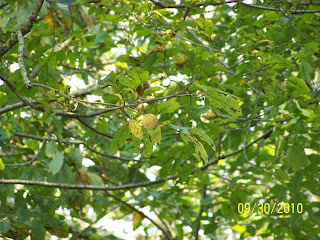 I don't know the name of this one either, but they are a plenty - one whole pasture full fadded before I got out with my camera. 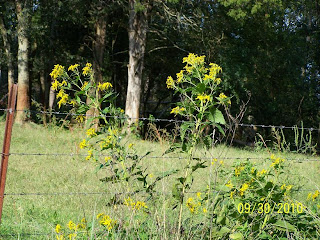 One of the decorative grasses in Bevs garden is putting on its plumage. 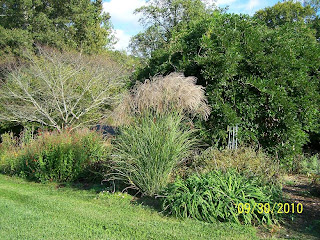 Pampas Grass at the end of our drive with really big plumes. 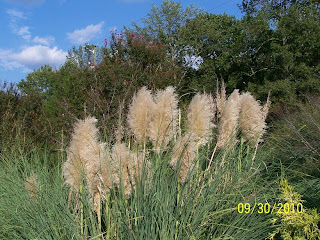 A traditional fall activity is wood cutting and splitting and as it turns out, I’m flush with smoking wood and I offered some of it to Chris Grove (Nibble Me This) for use with the charcoal in his Big Green Egg. There’s nothing like the sound of a chain saw on a crisp fall morning. I had a small peach tree that had died, a pear tree that I’d let get so out of control I decided to cut it down and start over with a new shoot coming from the roots and Chris wanted both of these. I don’t know why the peach died, but in the 10+ years it lived, I never ate the first peach from it, or it’s mate. I’m not good about keeping them sprayed, especially for brown rot, so I start with a tree loaded with little peaches that turn brown, wither and fall off – even the commercial orchard on the hill above me is struggling with this fungus. Maybe next year, I’ll get serious about it and be able to harvest a few.

I also have lots of wood from my Bradford Pear episode which he took some of along with some year-old hickory.  I didn't get any shots of us working but it just took a few minutes to deal with the two small trees.

Speaking of the Bradford Pear, it is a testament to natures will to survive as it puts on new shoots. 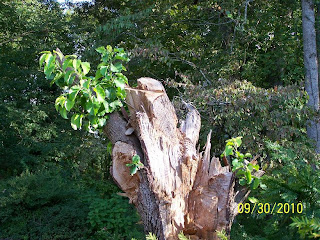 And for food, one last batch of Alabama Scramble, cooked up in the discada, fried local corn, and out of the garden mater. 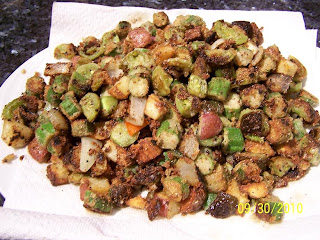 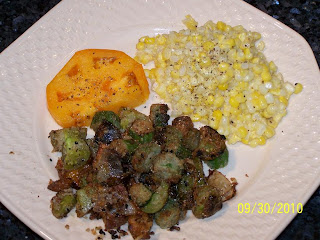 The discada has been cleaned up and put away for the season, although something could come along to cause us to get it back out.  While not real practical when cooking for two, it's a dandy tool when big jobs are on the menu - interestingly, we've never used it for Asian stir-fry.