Since this is continued from yesterday, you might want to check it first if you didn't catch it.  When we talked with the ranger at the Big Cypress visitors center, she suggested an alternate back county loop road to the one I had wanted to take but was closed and off we went. As is often the case in south Florida, roads are built by scooping up the sand along the road and using it to make a raised roadbed. As a result there is frequently a little creek like body of water along the road and such was the case for this back-country, unpaved road – a total trip of 16 miles.

In talking to the ranger, she said that as they enter the dry season, the gators begin heading for the deeper pools of water, which helped explain why the population at the visitors center pool had more than doubled in the past week.

As we drove and talked, we wondered how many gators there were in the glades and we thought they might have been endangered at some point. All I can say is there must be a lot as we saw a couple of dozen in the small parts of the creek we could see, one of which was right along the road.  Needless to say, we took these shots out the car window. 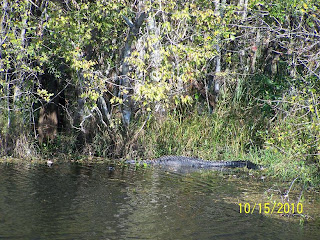 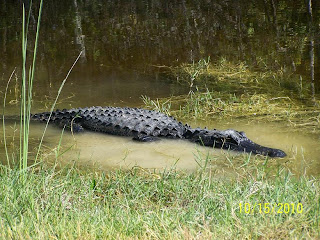 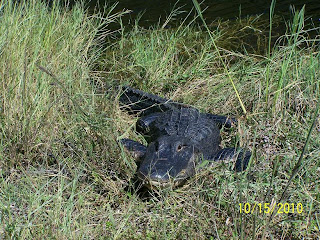 The ranger had told us about this bird that swam with it's body submerged and only it's head out of the water and it was sometimes submerged as well.  We'd seen several birds sitting on logs drying their wings and assumed it was these birds, when we saw what apperared to be a big snake sticking up from the water - on closer inspection it was one of these birds. 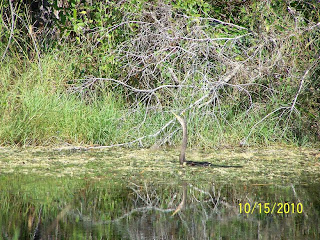 Perhaps the most interesting event was seeing three turtles sunning on some rocks and upon stopping and backing up for photos, they headed into the water.  Of course we thought we scared them, but as we discussed it, a gator came out of the trees and stopped on the rocks the turtles had just left - wish we'd gotten a video of the whole thing.

When I think of wilderness, I think of forested mountains, but I believe this is pretty serious wilderness and with so few landmarks I could imagine being lost forever. 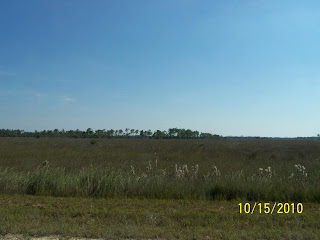 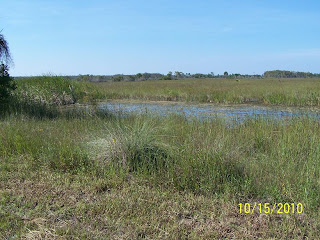 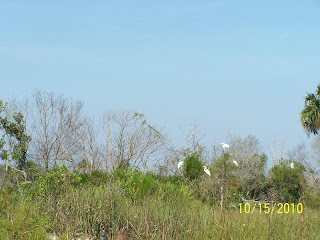 As a preserve rather than a park, there is some private land ownership with a few homes along this road, but I thought this was really funny.  Here is a mailbox with no evidence of access to a house anywhere around. 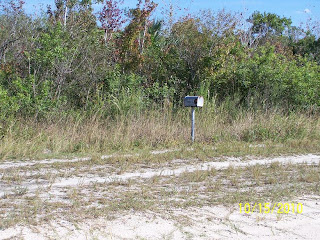 And this is across the road, so I can't imagine where they live. 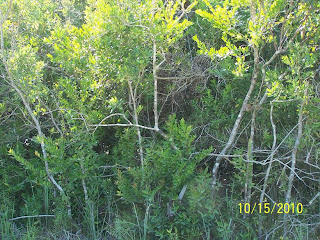 After our big Hoot's brunch, for supper, we opted for the beef filet remaining from Oct 14, pan fried in butter and olive oil and served over salad. 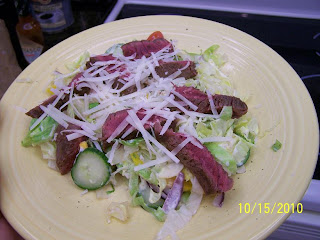 It was about as good as a day can be with good food and a great trip, and seeing places and things that were new to us - especially live gators in the wild.  We'd considered an airboat ride, but having done one years ago, we knew they wouldn't show us any more than we'd just seen from the car.  Hope you enjoyed the tour.