Pastrami Sandwich At The Beach

Bev had gone freezer diving before we headed for Marco and came up with a nice piece of pastrami. For some reason, we like pastrami sandwiches when on vacation and often had them grilled for breakfast before hitting the slopes back in our skiing days. I make pastrami fairly often using either store bought or my homemade corned beef and I don’t know which this was. (Pastrami = corned beef, rubbed with the correct spices and smoked). We usually just warm the meat in the microwave or a skillet after slicing, but for this meal I wanted to do it real New York deli style - which means steaming the whole piece then slicing.

Our condo is only equipped with the basic equipment and a steamer pan didn’t qualify, but we did have a big enough pot and a shallow cereal bowl. I inverted the bowl in the pan, added water half way up the bowl, topped with the meat, put on the lid and commenced to slowly steaming – the air trapped under the bowl made an interesting noise the entire time. 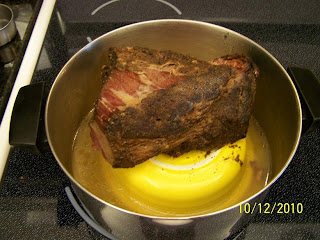 I steamed it for about an hour, sliced, and put it between two pieces of Pepperidge Farm rye bread with some Swiss cheese and spicy brown mustard - I wish I could have had some of the homemade rye bread from Hoot’s where we had breakfast. Unfortunately, I didn’t have the right knife to slice it thin, but trust me, it was still delicious. 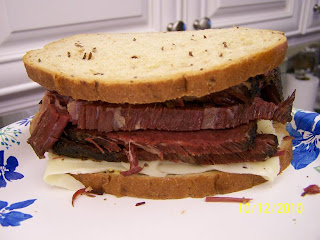 Bev and Pat grilled theirs and I ate mine on room temperature bread and I believe steaming is the way to go although I think another hour would have made it perfect.  Mine could have actually used less meat and another piece or two of cheese, but I was trying to emulate those from a New York deli with mile high meat.

If you readers from Oregon are football fans, you sure have plenty to cheer about this year.