We had about a quart of mornay sauce left from our Kentucky Hot Browns, while in WV, and after dipping into it for another dish, we still had enough remaining for a pasta dish. To kick up the sauce flavor, I sautéed some delicious Benton's country ham and garlic in a little olive oil, then added the peas since they were still a little frozen. 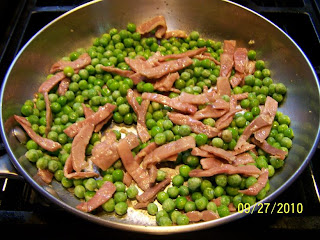 We still have tomatoes we need to eat and I used them and the peas for color and more flavors. I slowly reheated the sauce in a pan and added it to the sauteed mix along with the tomatoes for a quick heat up. 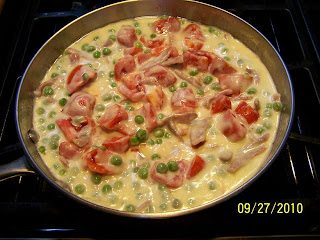 I then tossed with some penne, plated and added a little chopped green onion, red pepper flakes, and fresh grated romano, and I sided it with a second helping - smaller of course.  It was a delicious way to finish off the sauce and the only thing I'd do different is use more ham. 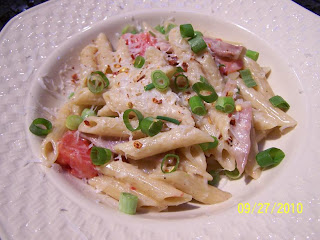 When we had the Kentucky Hot Brown Sandwiches in WV, we all agreed that some onion would make them better and I liked the onion on this dish and would recommend it for the hot browns.

And for the evening meal.  Since I now understand that requirements for a sandwich being a muffuletta are olive salad AND round muff bread, I'll call this an Italian meat and cheese, with olive salad, on a French baguette sandwich.  The olive salad was from Central Grogery, obtained during our trip to New Orleans.  When I was at the market, I couldn't remember the meat/ cheese ingredients, so I bought mortadella, baked ham, hard salami and provolone cheese.  Since we're trying to eat our big meal earlier in the day, it was just a small sandwich for supper - it's only about 4" long and 2" wide. 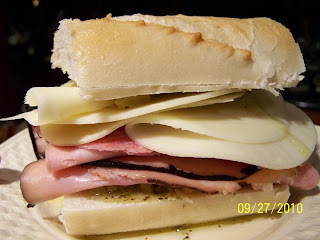 I can't exactly remember the taste of a Central Grogery muffuletta, but I know it wasn't any better than this - the olive salad didn't get clear to the edge, but it provided plenty of flavor.  It was a day of good eats at Almost Heaven South.  Thanks for stopping by and have a great day.