Smoked Chicken On The Gas Grill

I actually cooked this meal for Easter dinner back in April and have been saving it for summer time. I had posted about using your grill as a smoker and this is a how-to for smoking a beer can chicken on a gas grill. They are good for first timers as the moisture added to the inside of the chicken, from the can, makes them cook faster and helps them stay moist, so it’s easier to a have a first success. This is a long post, but I hope by reading it you will be able to smoke meat on your grill – you BBQers, may want to read someone else’s blog today.

I have a five burner gas grill and elected to run the two outside burners so the meat would get more even heat without me rotating it. If you use just one side for heat with the meat on the other side, rotate the bird 180* so both sides face the heat the same amount of time. To ready my grill, I first removed a grill rack and positioned the others to have access to the flavorizer bars on each end. 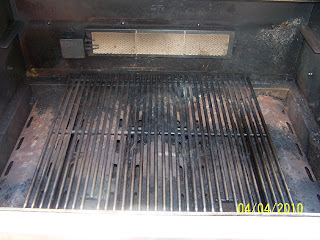 I then used heavy duty aluminum foil and aluminum duct tape (just happened to have some) to close up most of the grill exhaust vent. You can use wadded up foil, but you have to put it back every time you open the grill (that’s what I did the first time I did this). I did this to ensure the smoke and heat had to go to the center of the grill where the chicken was located. You may not need to do this on your grill. It would have worked perfect, except the glue on the tape melted so I used the grill warming shelf to keep it in place, which was still a little easier than putting the wadded up foil back in place each time. 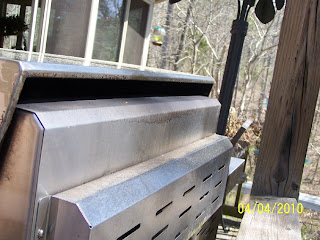 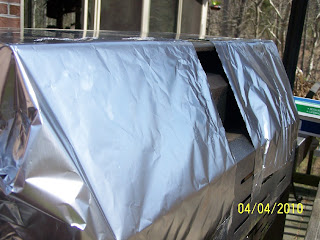 For the chicken, just prep as you would normally do to roast it, except, it’s important the hole in the neck cavity is sealed to keep the flavored steam inside the bird. You can merely use toothpicks to seal it with the flap of skin that’s usually there or seal it with an onion, piece of fruit, potato, etc – I had barely enough skin on this one. 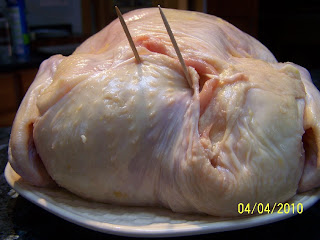 Now, let’s discuss the beer can process. I have can-stands (available at discount stores) that I use as they make the job of standing the bird easier, but they are not required – just use the can and the legs to make a tripod (I cook beer can turkeys using a 24oz Fosters Beer can). Here the stand and other equipment I used. 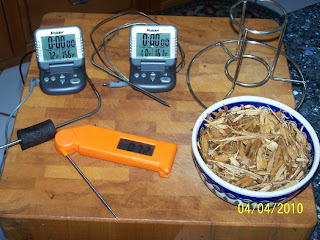 The purpose of the can is to add moisture and flavors through the inside of the chicken. I generally open the can mid afternoon, pour out the beer and remove the top as best I can (used my kitchen shears as the can opener wouldn’t work). I drink half the beer and put the rest back in the can (other liquids of your choice can be used), add herbs, spices and citrus to the can and let it sit around to warm up. I then spray the stand with Pam for cleanup, add the can and it’d ready for the bird. 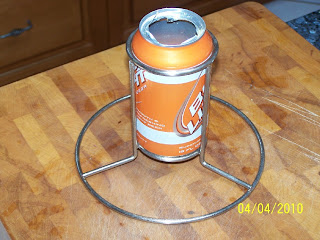 For this cook, I put a slice of lime and orange and some fresh rosemary and dried thyme in the beer can, oiled the skin and seasoned the cavity and outside with Wolfe Rub Citrus (we love it on chicken). You can put flavors on the skin or under it. Basically do what you would do for an oven-roasted chicken – your grill is about to become just a convection oven with a smoky environment.

Finally, the cooking process. I soaked some maple chips for a couple of hours and made up three foil pouches with them. I had a choice of hickory, alder and maple – chose maple as it’s supposed to have a sweet smoke. With all the other flavors, other than mesquite, I’m not sure I can taste the difference, but others say they can. Hickory, oak, and apple are usually available at the grocery store and they will all work well. I won’t need many pouches as the chicken cooks pretty fast. 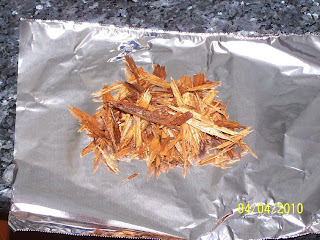 Note that I poked about four holes in the foil. 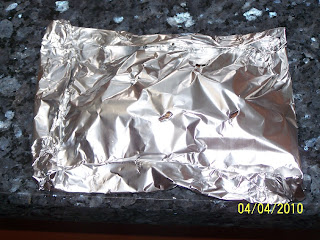 I turned all five grill burners on high to get it hot, then turned off the middle three. I cooked at 300*, but higher or lower will work – use the one that cooks the skin the way you want it – higher temp equals crispier skin. Unlike most typical BBQ meats that need low and slow cooking to get them tender, chicken does not need that and will just get drier if on the cooker too long. Basically, you are just roasting the chicken in a smoky environment to provide a layer of flavor you can’t get in your oven (unless you set it on fire). 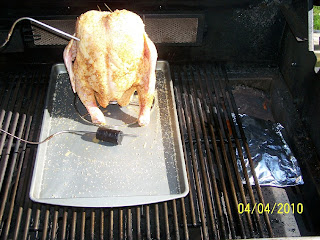 If you can’t maintain the temp as high as you want it, just set your chicken on a jelly roll pan and turn other burners on as low as possible to get the temp you want. The pan serves as a heat deflector and you’re still cooking indirect. You can also add liquid to the pan and you’re then cooking with a water pan smoker. Bet you didn’t know your grill was so flexible. If I didn’t smoke so much meat, a grill is probably how I’d do it. I’ve seen gas and charcoal grills that have a stack for a vent and they look perfect for the backyard griller/occasional smoker.

I put a probe thermometer in the breast of one chicken and plan to cook it to 170* - but I’ll confirm it and the other chicken parts with my insta-read thermometer (a must for serious cooks). I made sure it was in the fattest breast part and not touching a bone – many folks put the probe in the thigh and cook it to 180*, I just have better luck getting it in the breast. You can vary your internal temp to achieve the moisture/dryness level you like. By now you should be saying, “this is just like cooking the chicken in the oven.” The other probe, I’ve inserted in an old wine cork, in which I drilled a hole, and placed on the grate beside the chicken. I’ll control temp to it and know that’s what the meat is seeing. Note that I ran the wires thru the hole for the spit so as not to damage them. The probe thermometers are available at discount stores and Amazon – I use Polder, Taylor, and Thermapen.

Newcomers have a tendency to think they should see a thick smoke coming out of the cooker – wrong, as this will produce an acrid creosote taste – and coat your cooker with it. What you want is a thin blue smoke that you can barely see. Also, resist the urge to open the grill cover to check things – when you’re lookin you’re not cookin, but rather letting out the heat and smoke and extending the cooking time. Only open it to add more wood chips and when the probe says it might be done. Since the breast is in the higher and hotter part of the grill, it may get done sooner and if it does, when the breast is within 5 degrees of the temp you want, move the bird over direct heat with no pan and the lid open and cook the dark meat over direct heat to the temp you want.

Mine was done in 1½ hours and here is the finished product still on the grill. The one place you can get hurt is removing the can from the bird – as the can still contains boiling liquid. It’s best to have one person hold the can and/or stand on a solid surface while a second person lifts the bird off – it’s at least a three handed process. 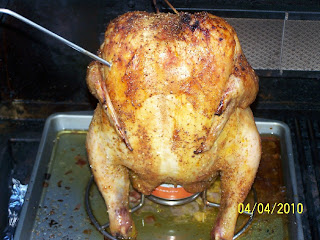 We sided ours with some sweet potato slices (one of our giant ones), which we boiled until partially done then finished in the grill. We just put oil and S&P on them, then butter when they came off – the real southerners probably would have added a little brown sugar as well. With Alex visiting her other grandmother, the kids visiting each other and the MIL in the hospital, only three of us for Easter supper, so we kept it simple. Here’s my plate, including some salad. 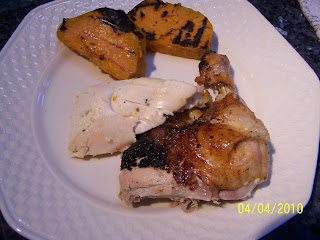 Everything went according to plan, except the glue on the duct tape melted and I had to lay my heating rack on the lid to hold the top of the foil, so wadded foil in the gap may be better or rely on something besides glue. I hope this gives you the knowledge and courage to try smoking on your grill. It’s not hard and will produce a delicious product – the maple smoke smelled so good. I use the same process for beer can chicken on the grill without the smoke. After this chicken success you’ll have, next try a small Boston butt and make yourself some great pulled pork. I like to use a disposable foil pan for it, so you can collect the juices for adding back into the pulled meat – after you de-fat it. I just empty the pan a couple of times once the meat reaches 165*, so as not to end up boiling the meat, put it in a fat separator and add it back to the pulled meat – very little else will be required. At 250*, it will likely take about 8 hours – depending upon butt size. You can contact me if you need more info - I’m trying to turn you all into BBQers. You Quers, please feel free to add your thoughts to this post.

Have a great Father's day and thanks for stopping by.