On Monday, we had leg of lamb for a family dinner and had a whole one left over, along with some salad, tzatziki sauce, and couscous. We also had some pita in the bread drawer and decided Gyros were in order. But before this meal, we had a little appetizer thanks to Bev’s stopping by the Wednesday afternoon farmers market – fresh, locally grown, boiled corn on the cob and it was very good.

For the meal, I reheated the lamb in a 250* oven wrapped in foil with it’s juices for about an hour to an internal temp of 137* and after resting, I sliced it thin for the gyros. I just cut the pitas in half, warmed them in the microwave, and stuffed the pocket. The stuffing consisted of thin sliced onion, sliced tomato, lettuce, lamb, and a spoonful of the sauce. I don’t know what I was thinking and ended up giving one of the gyros away. We've aldo decided we like the tzatziki on the couscous and I added a little more greek herb blend as well. 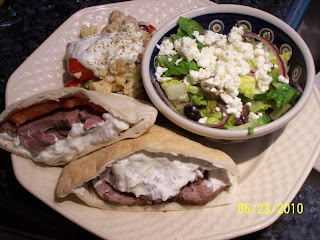 It’s been a while since I had a gyro from a Greek place and I know they are usually made from ground spiced meat in a loaf shape, but these would have been hard to beat.

After this settled, I went back later for a little slice of leftover fruit pizza. Leftovers can sometimes be some very good eats.