I promise this is the last one as the leftover tenderloin is all gone. Anytime Bev boils potatoes, she cooks extras for other uses – usually home fries – and a recent beans and taters dinner was no exception. I decided an omelet was in order for the final meal, stuffed with the pork, potatoes, onion, cheese and a slice of cooked bacon I discovered in the meat drawer. Here are the ingredients ready to chop. After dicing the meat, I realized that unless I wanted to make a bigger omelet, I had too much stuff, so I put one of the potatoes back and only used about two thirds of the pork. 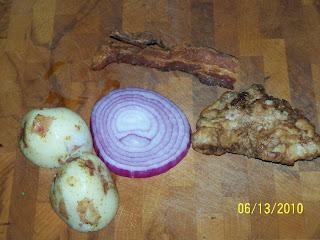 I started with a sauté of the onion and potatoes in a little olive oil, then added the pork and when it was warm, tossed in the bacon – it was already cooked crisp.

I removed the stuffing from the pan and added two eggs beaten with a little cream and used the typical cooking method of tilting the skillet and lifting the edges to allow the uncooked egg to run underneath. When the eggs were set, I added the stuffing to one side, cheese to both sides, folded it over and slipped it onto my plate. 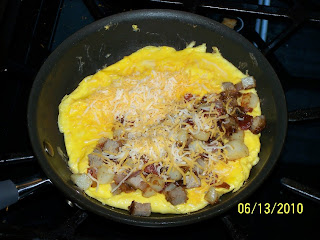 I also still had some leftover gravy and about three fourths of a biscuit which I believed had to be included with the omelet. 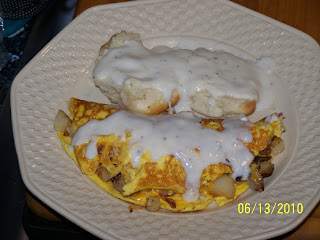 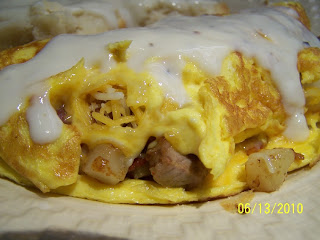 Not a bad way to finish off these leftovers but I had to skip lunch again.

The above meal was actually from a couple of days ago and the following is from yesterday. A&W has been a tradition around these parts for a long, long time and there is an old timey drive-in version down the road a few miles in Madisonville. In a bid to recapture my youth, I've been wanting to go there for lunch for months, but I never seem to remember it. Yesterday I had to go about half way there, Bev was available, and I remembered it, so in spite of the 90* temp, off we went. Bev just had a cheeseburger, but I wanted the full experience and ordered a footlong hotdog with chili, mustard and onion, an order on onion rings (to share) and a rootbeer.

Well I can mark that off my list of wants now. The hotdog looked good, but the chili tasted an awful lot like what I remember Hormel from a can tasting like. The onion rings had a nice crunch but not much flavor and the rootbeer came in a paper cup rather than the frosty mug I was expecting. Like many things, it wasn't as good as I remembered so either they've changed, I've changed, we've both changed or we just remember things better than they actually were. I had the same experience the last time I tried Sonic about 5 years ago. Oh well, guess I'll just have to suffer and eat our own cooking.