A while back, Kroger’s had Mahi Mahi fillets on sale so I bought a couple of them. They weighed about 2½ pounds and were at least two feet long, so I invited the sis-in-law and daughter down for blackened fish. For sides we decided on baked potato and garlic onions on the grill and Cajun slaw. For the taters, I just wrapped them in foil and baked them over low heat on the gasser and turned them every 10 minutes until done. For the onions, I used a Bobby Flay creation as best I could remember it – I cut the onion in half, smeared a clove of minced garlic on it, added a half tablespoon of butter, and S&P to each half and wrapped in foil cut side up. I put it on the grill over indirect heat and it was nice and soft when the potatoes were done.

Bev came up with the idea of putting the fish on a bed of slaw and dispatched me to find a Cajun slaw recipe on line. We had a pretty big head of cabbage and made a half recipe of everything, but only a quarter head of the cabbage. We decided to have the veggies in a more course state and therefore hand chopped them all.

Put mayonnaise and mustard in a bowl large enough to hold complete
mixture, but shaped so that the mixture can be beaten with a fork.
Beat mayonnaise and mustard until combined. Add olive oil slowly,
beating all the time. Beat until mixture has returned to the
thickness of original mayonnaise. Add Louisiana hot sauce, continuing
to beat. Add ketchup and keep beating. Add salt and garlic salt,
beating all the time. Add wine vinegar (this will thin the sauce
down). Beat this thoroughly, adding the lemon juice as you do so.
Taste for salt and pepper. Place shredded cabbage, peppers, and
onions in a large salad bowl. pour sauce over and toss well. This
should be done about an hour before serving. This cole slaw tastes even better the next day! (It might work fine to dump everything in and use an immersion blender).


For the fish, I used Emeril’s Essence for the spice and the following blackening process and it worked perfect. I used our 12” cast iron skillet on the grill side burner so I could cook it outside and use the grill for the other items.

I didn’t take many pictures of the process as I’ve seen several on the blogs I read with some excellent pictures. I did take one of my plate and had to use the flash as we were eating in dim light. 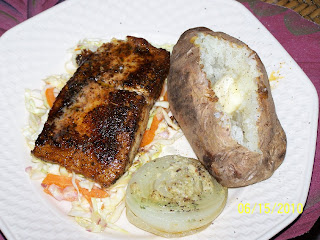 We all thought this was my best blackening effort so far and that it was a dinner guest quality dish - the blackening process worked great the slaw was excellent with it. Next time I need to remember to make up two batches of Essence – mild & hot. I thought the onion was just ok, needing more flavors.

We finished it off with a piece of frozen strawberry delight dessert.