Fruit Smoothie On A Hot Day

I never think of a smoothie as something to request and only very rarely accept one when offered, but yesterday was different. Bev had some fruit that needed to be used and when she asked, all four grandkids and my daughter said they wanted one but I didn’t accept, as usual. However, when I went into the kitchen and saw how much was left after serving the others and noticed the beautiful color and considered it was already 90* outside at noon, I decided to try one.

She made them with the blueberries, blackberries, pineapple, yogurt and ice in the Vita Mixer – which did a great job dealing with the blackberry seeds. She didn't measure, but guessed about a pint of each fruit and the yogurt and finished filling with ice. I thought it was very good and I won’t be so quick to say no next time. And it was so filling, it didn't take much lunch after that. 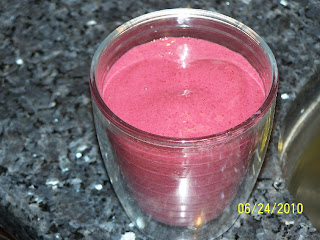