We had our Fathers Day get together Monday at the dock and Bev and I shared the cooking duties. I had two boneless legs of lamb in the freezer that I’d been wanting to cook, but I needed some lamb eaters here to do it (Bev’s not a big lamb fan). My daughter Kathy and her kids are visiting from Texas and as it turned out some friends of hers were moving to Mississippi and passing within 20 miles of here, so they joined us for the day. We ended up with 8 adults and 9 kids.

I’d decided a while back that I wanted a Greek meal, so we had the lamb, Mediterranean chicken, couscous, Greek salad, and some left over mac & cheese for the kids. I also cooked some chicken legs with simple spices for those who may not like the Greek flavors. For the lamb, I used a recipe adapted from the BBQU site. I squeezed the juice of half a lemon on each roast and sprinkled with the dry spice mix which was enough for both.

I then put them on the spit using the gas grills infrared burner and closed the lid. 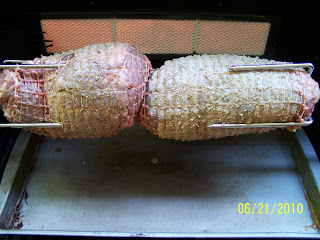 I then basted three times with the following, which was about 50% more than I needed: 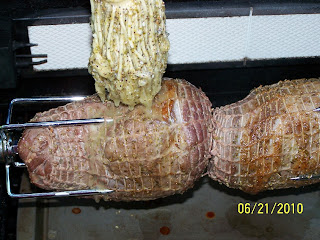 While I’d read that the Greeks like their lamb well done, my plan was to cook it medium rare in the biggest part. It’s been years since I used the spit and I was watching the color and development of the crust, which didn’t seem to be progressing very fast. I assumed it was just cooking slow, but decided to check it after 1¼ hours and found it to be 138*, and I immediately pulled it. I removed it from the spit, wrapped it tightly in foil, put in a cooler wrapped in a towel, and headed for the lake to cook the rest of the meal. After carving, I added the juices that had collected in the foil while in the cooler. At this point in the day, I obviously wasn't worried about presentation. 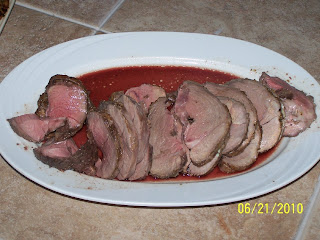 We also made a simple Tzatziki Sauce in case folks were big Gyro fans.

For the Mediterranean chicken, I used the following recipe from Pam over at For The Love Of Cooking. I used 1½ the amounts shown for 8 large bone-in thighs which I cooked on the grill, rather than the oven.

For the legs, I just tossed them in a bag with some olive oil and gave them a sprinkle of Wolfe Citrus rub. Here’s the chicken on the grill and the finished platter. 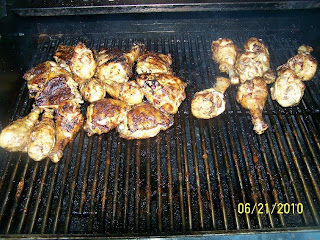 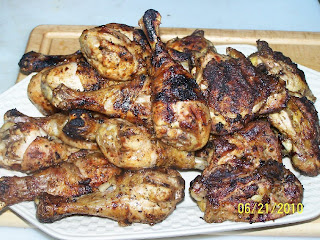 For the couscous I used the following recipe from My Recipes. It’s pretty long so just click on the link to have a look at it. 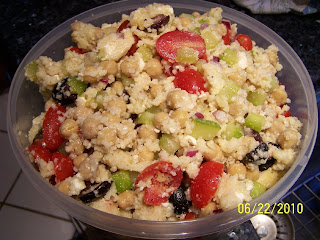 Finally for the salad, we used romain and iceberg lettuce, sliced cukes, sliced red onion, halved grape tomatoes, halved ripe and kalamata olives and crumbled feta cheese. We’ve found this to be a very good Greek dressing recipe. It came from Penzey’s Spices and was designed for their Greek seasoning – we just made a little substitution. Into a dressing cruet, add

Wait ten minutes, then add ¼ cup each of:

Shake well and enjoy – it doesn’t take a lot.

As is often the case when we have a big event at the dock, I don’t do well remembering the pictures so here are a few comments. We all loved the lamb, even Bev enjoyed it, and I would definitely use this recipe again – most even thought it was cooked just right. The Mediterranean chicken was also delicious, but next time I’ll make some extra marinade and baste it while cooking as the grill needs a little more flavors added. The salad was excellent as Bev’s usually are. The one disappointment was the couscous (and it took the most work) as it just didn’t have enough flavors to it. Bev mixed some of the tzatziki sauce with hers and said it made it really good – I hope so as we have a lot of both left over (I just had a bowl of it that way for breakfast and she's right). We also have one of the lamb roasts left and some pita in the bread drawer – I feel Gyros coming on.

It was a very nice Fathers day, although daughter Wende had to miss it due to work commitments, and after spending most of the day cooking, I enjoyed relaxing on the dock at dusk while the kids used every bite of the day for lake play. Here they are on the way out, swimming under the flood lights – I'd put them on the dock for just such occasions. 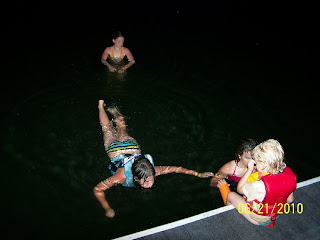