We’ve seen too much grilled chicken in blogs and on TV lately to not want to cook up a batch. I decided to go with a whole chicken because the packaged breasts pieces I find lately look like they came from an elephant chicken – I like them for smoked pulled chicken but not for grilling. Since it was to be a whole chicken, the next question is butcher it or spatchcock it – spatchcocking is quicker, supposedly cooks pretty evenly and only provides one piece to deal with. While I love the term spatchcocking, I actually halved the bird as I think the two pieces give me a little more flexibility on the grill.

After splitting, I rubbed the chicken with olive oil and seasoned it with some Billy Bones Original rub, including under the skin of the breasts. Here it is ready for the grill. 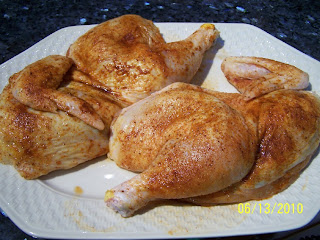 I used the charcoal grill, which I’m not very competent with, and started it skin side up, then flipped and got the skin crisp, then moved to indirect heat until the breast internal temp reached 160*. I brushed the bone side with Tennessee River Cranberry Delight and put it back over direct heat and sauced the skin side. I flipped it when the sauce began to char (Bev claims to not care for much black on hers) and gave the skin side the same treatment - I still got a little char on them.

Larry Wolfe over at the Wolfe Pit grills lots of veggies and recently posted a grilled vegetable sandwich that looked outstanding especially with the feta cheese addition. We decided to do the same thing but use the veggies as a side with the chicken rather than a sandwich. I used the same marinade ingredients as Larry and thru in some parsley we had leftover, then grilled them, but I sprinkled on some feta prior to removing them from the grill.

Here’s a couple of shots of the cooking process. 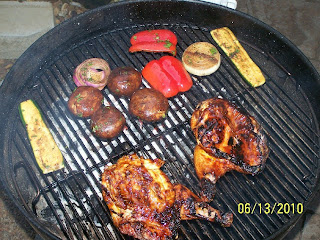 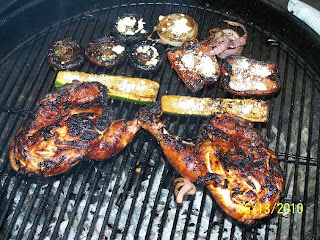 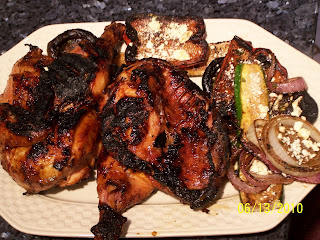 Here’s my plate with a piece of garlic bread I tossed on the grill at the end. 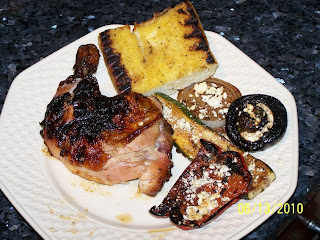 The chicken turned out really good, but could have used another coat of sauce - Bev said “you know, I think I like the caramelization on it.” I’ve been trying for years to convince her that it’s the best part of the chicken. We both thought the veggies were great and will do them this way again. Nothing special or fancy just a darned good meal.

Have a great day and thanks for visiting.