Coconut Shrimp And Other Good Stuff

This is the third shrimp meal in six days – guess we’re trying to get our fill while we can. Bev and her sister both love coconut shrimp and I think they're just okay – I’m more of a savory guy but have been more willing lately to try sweeter dishes. But before I get into shrimp details, the whole meal consisted of deep fried asparagus, orange salad, and shrimp, eaten as a three-course meal. This allowed all of the deep frying to be done in the same pot on the grill side burner and use the grill as a warmer, made it easier on the cook, and allowed the whole thing to go at a more leisurely pace.

The asparagus was served as the appetizer and I’m still working on improving mine – this is version 3 or 4. I used the same Paula Deen recipe as a base but last time decided we wanted more flour so I used 1 cup of flour and ½ cup cornmeal in the final coating. Click link for more details from the last cook including pics (I didn’t take any this time as it looked about the same). We used some dipping sauce Bev had brought home from Puleo’s Grill – their asparagus is the standard I’m shooting for. We liked the more floury coating better, now I need to get the spicing to where it’s where we like it.

For the salad. it was our first stab at Sam Hoffer’s orange salad. She brought it to the blogger party and has a photo on her blog - I was anxious to try and make it as well as eat some more of it. Her recipe isn’t very specific, cause she knows what she’s doing, but for 6 people, we used 4 small naval oranges and a whole vinaigrette recipe. We sliced the oranges about ¼” thick and made the dressing per her directions:

Per Sam’s instructions, we gently tossed the oranges with the dressing then laid them on a plate. We then topped with 3/4 tbsp of chopped rosemary, 1 tbsp of chopped parsley, 3 thin slices of red onion – halved, and 8 kalamata olives (quartered long ways). Bev liked the idea of serving it on some greens, so after removing the oranges, we tossed some romain lettuce in the remaining sauce. To serve, we passed the greens first, for those who wanted them, then the orange salad. 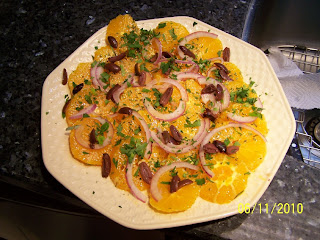 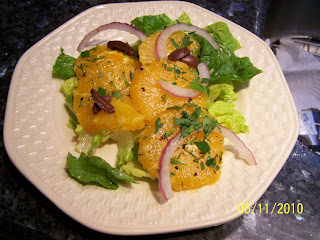 It was just as good as I remembered and a definite keeper recipe – thanks Sam.

I’d found this coconut shrimp recipe a while back at CDKitchen and had been wanting to give it a try. We had six diners and cooked 2# of 15 count shrimp, but since I just single dipped them, this recipe for the breading was plenty.

I peeled and butterflied the shrimp then set them on a rack over a jelly roll pan in frig to dry some. I single dipped them and it was way plenty unless you like a little shrimp with your breading. In spite of my best effort, nearly everyone of them had the tail fold back over the body and attach when I dropped them in the pot, so they don’t have the classic shrimp look to them. 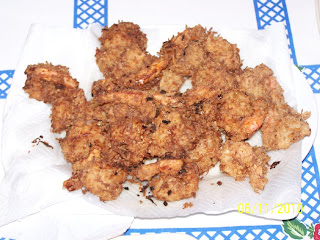 My plate - all we had were the shrimp and some garlic bread. 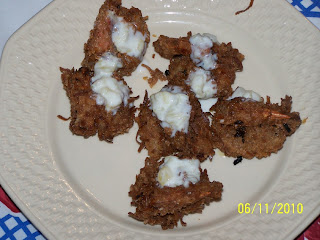 Bev oohed and aahed and said they were better than those from the restaurant in Sint Maarten. She even used very little of the dipping sauce. Actually she oohed and aahed over everything. The photos don't do them justice but if you like coconut shrimp with a sweet sauce, I can’t believe you wouldn’t love these. Even I thought they were really good and the pups loved the tails.

When using new recipes, we are occasionally disappointed when it doesn't live up to our hopes, but all parts of this meal met or exceeded them. Cooking the meal this way worked great but it took a while as we started eating at 6:45 and finished about 8:15 so it was more like a dining event. The nice part was the cook wasn’t stressed out, got to eat every course with the others, and we visited between courses. All in all a keeper event.

We finished the evening watching “It’s Complicated” and found it to be a cute light movie - Meryl Streep is such a great actress.