Shrimp And Veggies At The Dock

Bev stopped at the Wednesday afternoon farmers market and came home with some orka and her sister stopped by a little market and got some fresh corn this afternoon – our first okra of the season. We decided since it wouldn’t be much trouble and it was several degrees cooler, and the kids wanted to swim, that we would cook and eat down at the dock. The menu was fried corn (we’d had boiled the past two days), fried okra and grilled shrimp.

Bev cooked the okra in the discada, cowboy wok, which works perfect for a big batch like this – we don’t use it much but when we need it, we need it. We use oil for the vast majority of our frying and olive oil for most of it, but like others have said about frying chicken, good fried okra requires solid Crisco. Bev has tried a variety of oils, but for whatever the reason, it just isn’t as good. Just getting started. 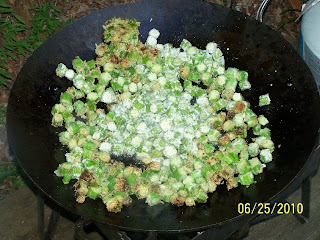 The cooking set up. 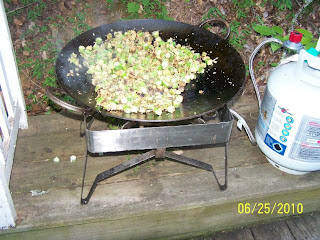 About ready to be taken up. 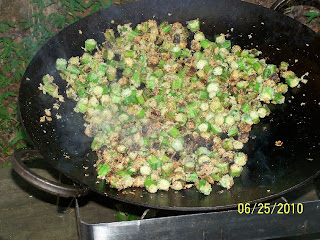 I’ve likely said this before, but before moving to Tennessee, fresh corn always meant boiled and eaten from the cob. However, when I met Beverly, I was exposed to fresh corn, cut from the cob, and fried in butter – oh my but it is good, but a little fattening (I’d say Paula Deen loves it). I just cooked the corn on the grill side burner while I grilled the shrimp and Bev dealt with the okra. As an old corn grower, I’ve found that fresh picked sweet corn is good raw and merely needs to get hot before eating (a 5-7 minute dunk in boiling water is all I give the right-out-of-the-garden corn). Since this was picked in the morning, even though it was a super sweet variety, I still actually cooked it a little. Here's the start. 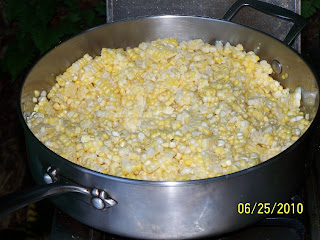 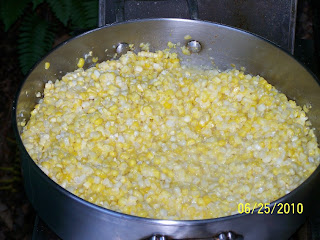 For the shrimp, I melted a stick of butter along with the juice from a quarter lemon, and a tsp of garlic salt and brushed it on one side. I sprinkled with Old Bay, put that side down on the grill and gave the top side the same treatment, then brushed with the butter after turning and when done. I knew she’d been buying them each time Krogers put the 15 count shrimp on sale for $7.99, but I didn’t know how many – after eating two or three 2# bags, we still appear to have about 14 pounds. Perhaps I should consider them an investment rather than food and see if I can double my money on them – nah I’ll just eat them. 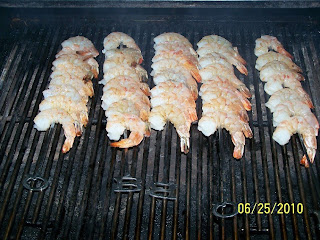 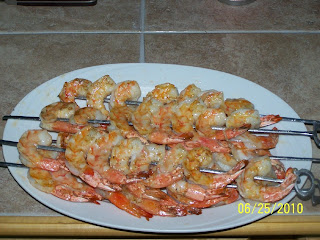 My plate of tasty goodies – we managed to turn some pretty healthy food into not. 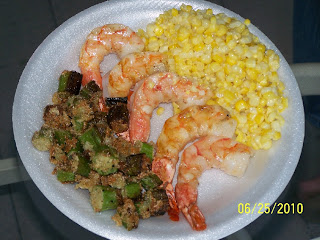 One of my goals is to be able to cook really good seafood and these were my best grilled shrimp ever, as agreed to by everyone. I think I now have grilled shrimp at the good-enough-for-company stage. The corn and okra were delicious, as they always are. We ate about 7:30 then sat around and visited until 9:45 - my favorite dock time is after dark.