It was a beautiful day for a lake party (with only one brief shower) and while only four of us bloggers made it, we still had a good time. Several others who had indicated interest, unfortunately, weren’t able to make it. Attendees were Sam My Carolina Kitchen & Meakin Hoffer from Andrews, NC, Alexis, Chris Nibble Me This, & Trevor Grove from Knoxville,Tn, Katherine Smoky Mountain Café, A.J., Lauren & Kaitlin Aucoin and friends Madison and Courtney from Seymour, Tn, our neighbors Pat & Steve Lafon, Bev’s sister Pat, and Bev, Alex, & I. It sure was great to meet everyone. My granddaughter Alex’s name is Madison Alexis and each of her names was represented by another attendee.

Since we were expecting up to 20, we definitely had plenty of good eats - if you didn’t know better, you’d think is was a group of food bloggers. I’ll let each of the others blog about their dishes, but in general, the Hoffers brought the salad, the Aucoins and Doolittle’s brought the entrees, The Groves brought the sides and several brought a dessert. As you would expect, I thought everything was delicious. Bev and I provided BBQ ribs and chicken and fruit pizza, and frozen strawberry delight that never even made it out of the freezer. I posted this one yesterday, but this is the meat headed for the smoker. 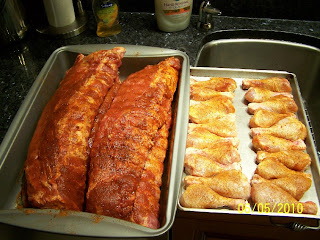 I just got a quick pic of the finished product (the line of hungry teens had formed), but here’s the ribs with two different sauces and the middle one bare. 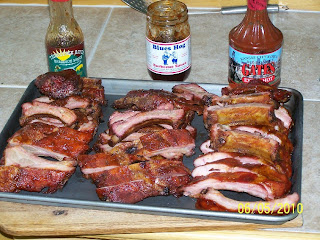 I used chicken legs as they were small and easy to eat for this type event. 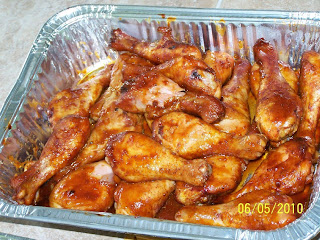 For the fruit pizza, Bev went to the local farm and picked the strawberries Friday, but had to buy the other items – our blueberries are almost ready. It’s a delicious dessert and I’ll post the recipe tomorrow. 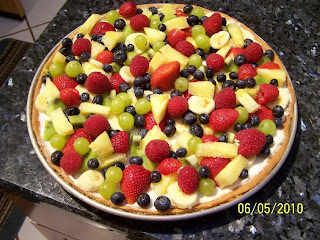 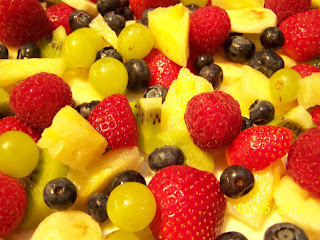 The following shots are of some serious laying around. In case you don't know what the bloggers look like: Sam is in the yellow dress, Katherine is in the red top and jeans, Chris is in the tee shirt, ball cap and shorts in the last pic and that's me behind the camera. 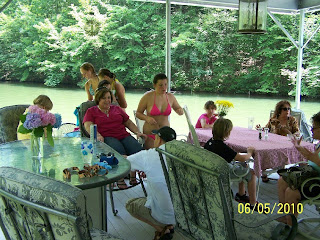 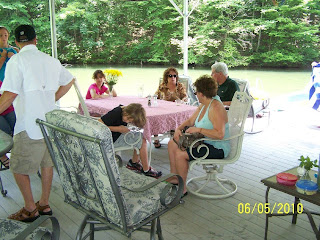 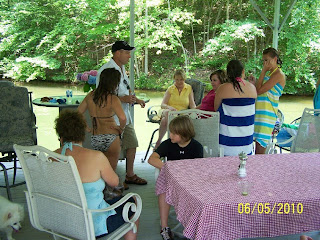 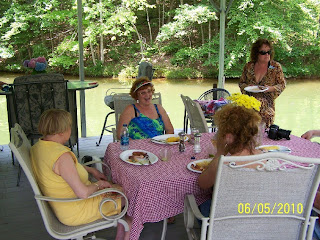 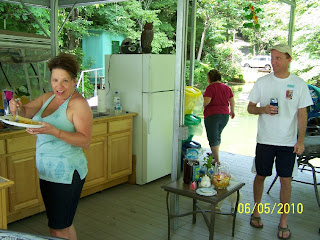 We ended up with six kids ranging from 11 to 16 and one with a boaters license and jet ski driving experience, which meant I didn’t have to be the driver. The jet ski holds 3 and the towable inner tube holds 3, so all 6 of them could be involved at the same time. They wore the thing out and we ended up having to go to all of our storage places to get enough fuel to keep them running. At one point they were gone long enough for the dad’s to get worried, which gave us a good excuse to load on the pontoon boat and go look for them. They were right where they were supposed to be and just having a blast. So we toured around the lake until we were also low and fuel – but it was a nice little ride. I bet I know 6 kids who slept good last night.

I think all of the adults had a good time as well (I know Bev and I did) and the Aucoin’s hung in with us until around 9pm – then the teenage girls were tired and needed to go home - imagine that. Bev and I stuck around the dock until about 9:45 finishing our adult beverages and watching the bats do their bug-eating thing.

We decided we might have to get together again before the summer is over and Bev and I, as always, enjoyed sharing our little piece of heaven. Be sure you check out the others blogs for more pics as I think they took more than me – as usual I got too busy having fun.