You’re in luck, I’m about out of the tenderloin, so maybe only one more post. This morning, I pared it with some of the leftover cheesy potatoes from dinner the other night for one of my favorite breakfast – potatoes with an egg on top. Normally it’s potatoes without the cheese and I cook the egg with a running yolk to mix with the potatoes. Fortunately, today I had the cheese on them cause I broke the d#&* yolk when I cracked the egg into the pan. It was going to be a pretty sunny side up egg on the taters, but I ended up flipping it for a few seconds instead – I probably don’t break the yolk more than a couple of times a year and it had to happen for this picture. I could have fried up another I guess, but I’m too cheap for that and the other stuff was hot and ready to go – guess you know my priority. 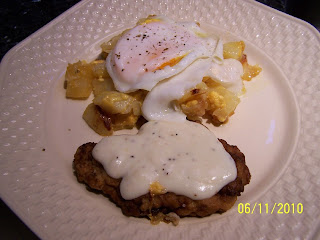 It was still delicious especially, beside the tenderloin and gravy – this will have to be another no lunch day.

Bev visited the farmers the other day and for supper it was just peanut beans (pink runners) and parsley new potatoes. See, we eat sensibly on occasion.