I’ve mentioned this before, but when I was a kid in WVa, I lived on the same lot as my grandparents and just across an alley from an aunt and uncle and during the summer the group grilled out nearly every day. One of my favorites was potatoes, onions and cheese cooked on the grill in a foil pouch and so I made it tonight to go with some grilled shrimp.

First the shrimp. I rarely cook seafood that I really like but realized I love shrimp scampi and decided to use the same ingredients on the grill. So after cleaning, I marinated them in the following courtesy of ehow.com for about 45 minutes:

I used 2 pounds of 15 count shrimp and they were a great size for this. I only used a half stick of butter and it was plenty and I salted the shrimp a little after skewering them. When I put them on the grill I had an immediate flare up and had to manipulate them to keep from burning but it created an excellent smoky flavor on them. I cooked them for just a few minutes on a side and we all thought they were delicious – Bev added a little sriracha to hers. 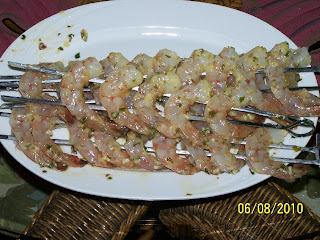 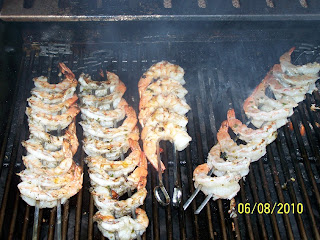 And now back to the potatoes. I diced up about eight medium russet potatoes and four medium onions, chunked up about 2” of Velvetta and ½” of cheddar from a two pound block. Mom always added some butter chunks and canned milk but each time I’ve done that I have excess liquid in the foil, so I left it out. I believe a little of the milk would have helped the cheese be a little creamier – so I’m sneaking up on how she did it. I think next time I’ll also add about 50% more cheese. I had such a pile I was barely able to crimp the 18” foil around it - be sure to Pam the foil. 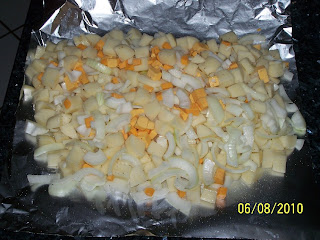 I had them on the gasser over low for about 45 minutes – when the foil poofs up from being full of steam, the taters are pretty much ready. I then moved them over to a no heat section of the grill while I cooked the shrimp. 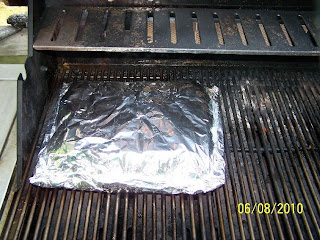 My favorite part is the cheese that gets fried against the foil. 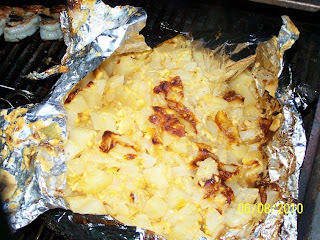 They weren’t exactly like Mom’s but they were outstanding – both helpings of them.

Here’s my plate – sorry for all the flash pictures.. 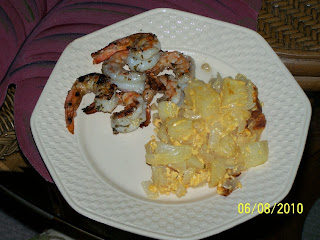 We still had a crust and fruit leftover from the blogger party so Bev whipped up another fruit pizza for dessert. She only used about 1/3 of the recommended glaze and it seemed the right amount.

The pics don't do it justice, but we all thought it was a very good meal and since Krogers had their 15 count shrimp on sale again this week for $7.99/lb, we stocked up.

Welcome new followers. Have a great day and thanks for stopping by.