We’ve had a pork tenderloin in the frig for a few days and it was really needing to be cooked. My plan was to grill it using a different marinade or different spices or new sauce, that is until yesterday when Alexis Grove’s super good looking steak biscuits popped into my mind. So I asked Bev how the idea of pork chop biscuits sounded to her and she liked it. Here’s the best part – she couldn’t sleep while I wanted to sleep late, so she got up and made the meal – I got up when I heard the distinctive sound of a mallet hitting raw meat. Like Chris, I helped by staying out of the way and snapping a few photos.

She cut the tenderloin into 1” thick pieces and pounded them down to about ¼”. For breading it was just a dip into seasoned Cruze Farm buttermilk then flour. The milk was seasoned with a chicken fried steak blend I keep on hand:

Here they are drying for a while prior to frying. 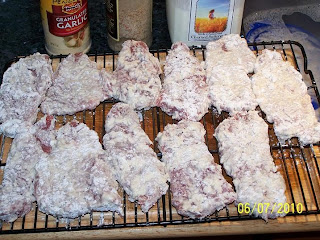 While the meat was drying she made the biscuits just as Alexis did – Bisquick and Cruze Farm buttermilk – as Chris mentioned in his post, this is great stuff. I’m a big fan of buttermilk and grew up drinking the real stuff – leftovers from the butter churning process – and this is the closest I’ve found to that. Here are the biscuits heading for the oven. 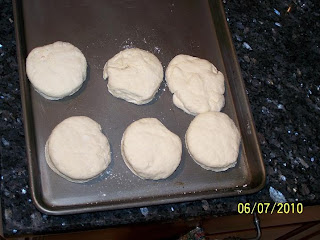 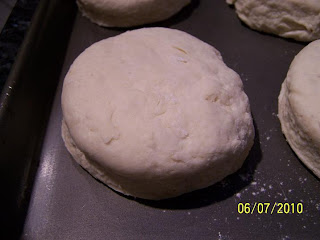 The meat ended up in nice sized but elongated pieces and Bev suggested we could cut them in half but just like burgers and other items on a bun, I like for the meat to be the first thing my mouth meets – I think I’ve said this before. She fried them in a 12" cast iron dutch oven with a 1/2" of peanut oil - the higher sides of the D.O. significantly reduces oil spatter on to the cooktop. Here’s the finished meat – she cooked the whole loin and it will make good leftovers. 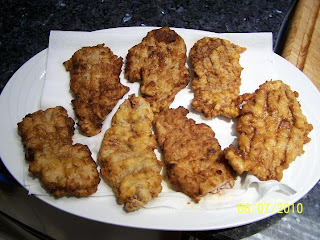 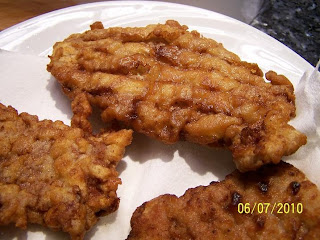 Ever hear the term cathead biscuits – this is them – the size of a cats head – they got a little brown but still ate well. 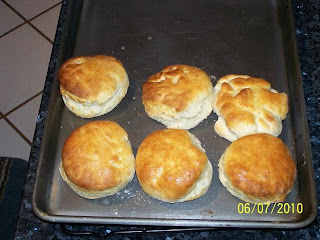 I think they are right when they begin to split open. 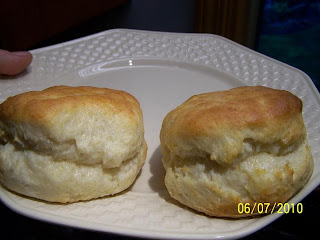 And the finished sandwiches – I ate two so I wouldn’t have to worry with lunch. 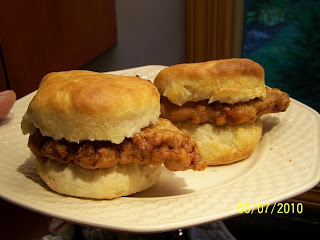 The meat and biscuits were both delicious. The seasoning worked well with the pork as I could tell it was there but still taste the mild pork. I wouldn’t want to eat this meal every day, but I’m sure I could choke it down a few times a month. What a great way to start the day and thanks Alexis and Chris for the inspiration (Those guys can cook). Now I can’t wait til we have some beef pieces that need to be cooked.

Ever wander how we can afford a place on the lake - just yesterday I was notified via six emails of the $61.8 million available to me. We may have to throw another bloggers party when all that cash shows up. I make a joke out of this but I'm sure way to many folks get scammed by these - I even know one who did.