Back From A Busy Three Days

Well, I sure blew it on posting every day and I had a lot of good stuff and photo ops available the past three days, but I’ve just been busy and kept forgetting the pics. A BBQ buddy of mine came in on Thursday to spend the weekend while he and his wife participated in a BBQ competition and I assisted them (gofered). I fixed them a rib eye steak dinner with fried potatoes, onions and peppers and a salad for dinner Thursday. Friday for breakfast it was sausage gravy and biscuits, potato pancakes, and scrambled eggs. Lots of missed photo potential, but I did get a pic of the salad dressings, which started with Thousand Island from the Waldorf Astoria recipe (makes 1 ¾ cups)

Stir all ingredients until well combined.

I’ve had many folks say they did not like 1000 Island dressing (they’ve had only bottled), until they tried this and discovered what it really supposed to taste like – light years better.

Then made some blue cheese from a Chef Chez’s recipe of equal parts of blue cheese, sour cream and cream cheese. For stronger, use 2 parts blue cheese or somewhere between. I would have used more, but only had 4 oz of blue cheese.

They were all good.

Here's a pic of them but I had a little too much flash - the 1000 Island is really a little pinker. 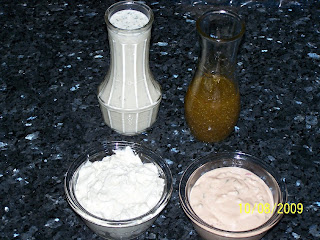 I’m not a BBQ competitor, but, since Wamplers Sausage is one of the contest sponsor’s, they had an Anything Sausage contest Friday evening prior to the real contest and we decided to submit some of my fatty. The turn-in time matched up well with the onset of turn-the-day-into-night black clouds and a tornado warning. As a result, we tossed the entry into the turn-in box, submitted it and battened down the cook site for the impending thunderstorms. We then donned rain gear and prepared to hold down the Easy-Ups in the wind – unless we actually saw a tornado, at which point we would have headed for shelter 50 feet away. We ended up getting 5th place out of ten in sausage, for which I was pleased, considering it was just my standard bacon explosion fatty. It looked similar on the outside to the one in Wednesday’s blog, except I wrapped the bacon on a forty-five, but the inside was more uniform due to being well mixed and extruded from the jerky gun. That process worked like a charm and I’ll make sure I get some pics next time. I forgot to take my camera to the competition, but others took pics of our turn boxes and my fatty

This was my second time doing a comp with this BBQ team and the second time with serious thunderstorms – maybe I’m the jinx. If I do it again and we have the same weather, I’ll take the hint
Posted by Big Dude at 11:19 AM