Alex has a Social Studies project for school due this week and she had been very secretive about what it’s supposed to be or what she plans to do. After our asking about it a few times she said not to worry, as she knew what to do and what she had planned.

Saturday afternoon, she ask to borrow my computer as hers didn’t have the right software on it and she went to work, still being secretive and she was still at it when I went to bed – I turn in early (but I’m writing this at 4am).

She advised she needed to go to Walmart on Sunday to pick up a few things for the project and off she went with her Meme. They came home with several bags full of stuff – which I was told would be for this and several more projects.

Since she had it stored on my computer, I had a chance to look it over before she printed it out and was blown away. She did it about Egypt and had researched it and developed a first class Power Point presentation. I watched her make a few changes and she maneuvered around Power Point and with other sites so quickly it hurt my eyes to watch – she’s a whiz on it and I now know where to go for help. I tried to post one of her Power Point pages but couldn't figure out how and she's not here to help me.

She began the assembly process as soon as she got home about 7:30 Sunday evening and would hardly take the time to eat some dinner and by 9, she was done. This is her at work on putting it together – we couldn’t convince her to use a table and she insisted on using the floor – her favorite venue for all things. We had to put the new puppy in the kennel for this effort. 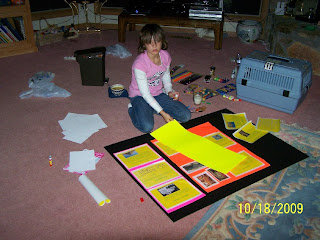 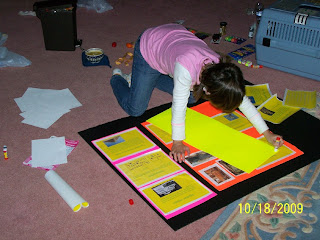 Here’s a pic of the finished project for which she planned, made all decisions, picked out all materials, and assembled. The only help she asked for was cutting one of the large pieces of paper in half. 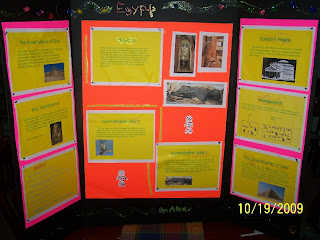 Needless to say, I was impressed and am continually amazed at what she can do when she puts her mind to it. If only we could figure out how to motivate her to put even a little of this energy into things she needs to do, but doesn’t necessarily want to – I’m sure if we do figure it out, we can bottle and sell it and make a fortune.

We had a hard frost on the pumpkin this morning, so I guess summer is definately over.
Posted by Big Dude at 9:48 AM