The Garden Is Officially Done

What a beautiful fall day it is here in East Tennessee – clear blue sky and about 60* as I write this – I’m taking a back resting break from pepper washing.

After two nights of frost this week, the garden is now definitely finished for the season. I harvested the remaining sweet peppers today and have a pretty big pile. We just slice into strips and freeze the sweet ones in quart bags and use them for cooking – we put peppers in many, many dishes. We used to chop some, but realized we could always chop the strips, but found it very difficult to reassemble the diced ones in to strips for stir fry, fajitas, etc. Since they lose their crunch when thawed, they don’t work well in salads, etc. but they're great for all things cooked.

Here’s a pic of the sweet ones. A few will be used for fajita’s at Sundays close-the-dock-for-the-season party, the ripe ones will be cut up and the others will be given a week to ripen before slicing. 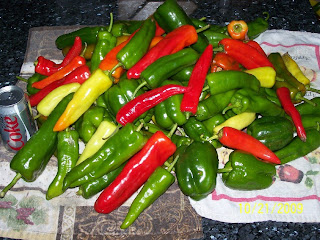 I also picked about 6 gallons of paprika’s and I’m hopeful that most of them will go ahead and turn red so they can be dried and ground – it takes lots of peppers to make a little powder – don’t think I’ll go into the paprika business without a factory. 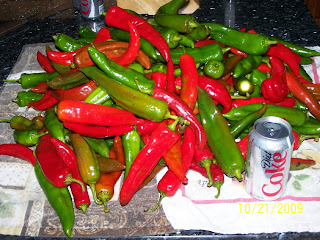 I also picked a few gallons of anaheims. The green ones will be roasted, peeled, frozen and used as, what else, chile peppers (we don't have to buy canned ones this way and can even make our own Rotel), with a few of the bigger ones becoming chile relleno’s soon. The ripe ones will be dried and ground. Here’s a pic of the pile. 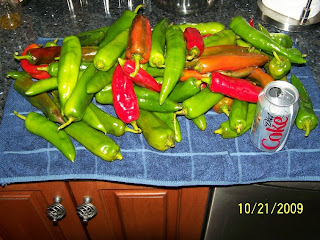 Finally, I froze a few whole jalapeno’s for use in salsa, soups, etc – we still have plenty of sliced, pickled ones from previous years.

As is usual for peppers, they begin putting on lots of new fruit in late summer as it cools off a little and I probably left as many peppers in the garden as I picked because they were too small to fool with – which it absolutely pains me to do.

Tune in tomorrow for the rest of the story and thanks for reading my ramblings. Larry
Posted by Big Dude at 3:56 PM