Good Use For Leftover Salmon

In case you haven’t noticed, I try and post something everyday, even when I have nothing worth while to post – guess I just like to hear myself talk, so to speak.

We had some salmon leftover from the plank grilling the other day and for a while, I’d been thinking salmon cakes (salmon patties when I was growing up) – so I believe now is the time. Since I had too much for just the MIL and I, decided to invite my youngest daughter down for Sunday dinner and to have another taste tester.

I think my mom just used canned salmon, egg, oats and spices for hers and most recipes I’ve seen use bread or cracker crumbs. However, in looking through recipes on the web, I came across a very simple one from Cook's.com that includes mashed potatoes (one of my very favorite foods). As a plus, I’ve been wanting to boil up some potatoes to have on hand for breakfast home fries, so I cooked enough for home fries and mashed enough for the salmon and to have extra for potato pancakes later in the week – remember I’m cooking for just two so have to plan ahead.

I liked the potato idea, but wanted more flavors and came across a recipe from Rachael Ray that had what I was looking for, so I combined the two. One recipe called for seasoned bread crumbs and one called for Old Bay, but digging throw the pantry, I came across a tin of Potlatch salmon seasoning, made exclusively for Williams Sonoma, it said, so I read the ingredients and decided to use it.

I flaked the salmon, dry mashed the potatoes then added the other ingredients and mixed well. Then I just used plain bread crumbs for the coating. Fried them in an oil/butter mix.

Sided it with a Caesar salad and succotash (had some carrots that needed to be used) - it made a dandy meal.

Here's the mixture with everything mixed together. 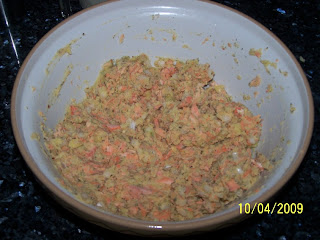 The patties , scuse me - cakes, ready to be breaded. They are a little delicate so handle with care. Think I'll use an additional egg next time. 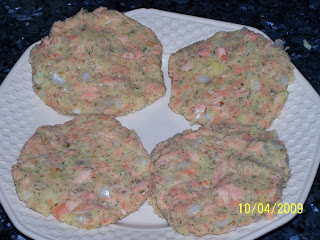 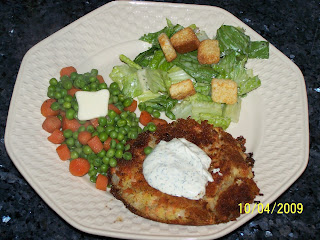 While I think everyone should use their own flavors in this, I liked the different texture the potatoes bring to this recipe and would definitely do it again but not every time – my daughter agreed. If you have a killer salmon cake recipe, just substitute potatoes for whatever filling you usually use and if you have a killer recipe, I'd appreciate a copy of it.
Posted by Big Dude at 12:58 PM