Another Dog – Just What We Need

Since Alex moved in with us, she has continually said she’d like to have a pet (pig, goat, cat, dog) that is hers and hers alone. Since we already have 3 dogs and a cat, we’ve been resistant to anything but a 4-H project animal – which is currently planned to be a goat. While the girls were in Florida last week, a little dog showed up, hiding under the car parked outside. I just ignored it in hopes it would go away or its owners would show up to claim it. The next day, I was advised I had a dog living behind the freezer in the garage and she was given food and water by the advisee. I now knew she wouldn’t voluntarily leave, but still held out hope her owners would show up to claim her – no such luck. The next day my daughter Wende made up with her and it was obvious the little feller was a cute, loving, active puppy. So Wende gave it a bath, we determined it was a female, sent pictures to Bev in Florida, and we agreed to allow Alex to keep her – if she cares for her. Not sure what breed she is, but she sure can jump. So now it’s 4 dogs and one cat, but the new pup is in lieu of the pig, goat, etc – I can live with that. Now it’s off to the vet for a check up, shots, worming, etc. Here are a few pics: 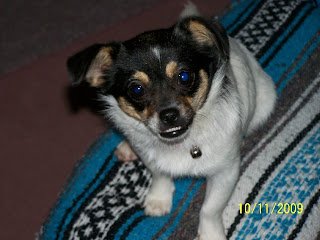 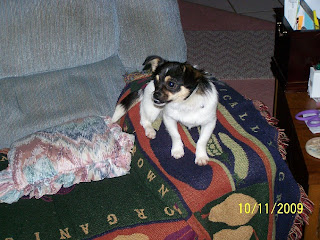 I believe they're bonding - both are sound asleep 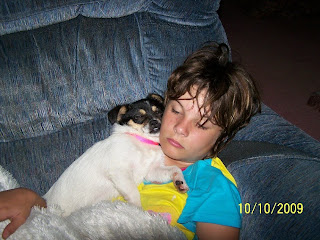