Bev picked a couple of eggplant from the garden the other day, and in an effort to try and eat what we have on hand, it’s eggplant parmesan for dinner. Most recipes involve baking the eggplant after frying, but we like this quicker version. Here’s a good site for the baked version and fried eggplant in general. http://startcooking.com/blog/383/How-to-Make-Eggplant-Parmesan

Started off by making the tomato sauce using my recipe, which is a combo of several I’ve seen. It’s pretty tasty and although we’ve tried others, we keep coming back to this one. I thought about using pre-made sauce (which makes the dish quicker), but I had plenty of time to make it. Here’s the recipe as usually made, but today I didn’t have the Italian sausage to put in it (although I really like the flavor it adds) and since we have plenty of basil, I tossed in a little fresh julienned leaves at the end. Also used one quart of tomatoes and one quart of juice – both home grown and canned.

· In a large pan, heat olive oil and saute the onion, garlic, celery, and carrot until all are soft (about 10 minutes)
· Add 1 quart of tomatoes and bring to a boil. (I used the juice here)
· When veggies are tender, remove from heat and puree in food processor or use emersion blender. Return to pan.
· Add remaining tomatoes, tomato paste, spices, and meat.
· Simmer for 2-3 hours.
· If too acidic for your taste, stir in butter (can also add a little sugar).

This is a shot of the veggie saute for the sauce 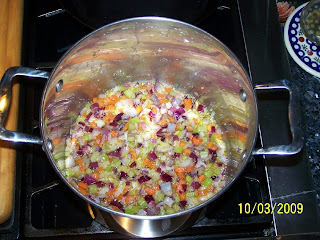 A quart each of tomatoe juice and chopped tomatoes 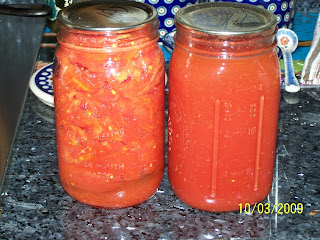 Blending up the veggies in the sauce before adding the tomatoes - I forgot to take a pic of the finished sauce with the warming meatballs. 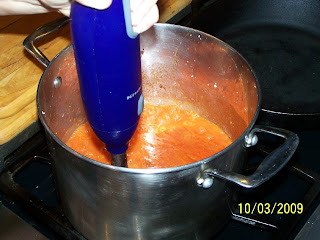 We just sliced the eggplant long ways (as they aren’t very big around) in about 3/8 inch slices, then salted them and let them set in a colander about 30 min then blotted with paper towels. They were then dredged in seasoned flour, dipped in buttermilk, then dredged in Panko bread crumbs and fried in olive oil – just use your favorite breading combo. After flipping, we added shredded mozzarella to each. When the eggplant was done, it was plated, topped with marinara and fresh grated parmesan.

We sided it with some meatballs from the freezer that Bev had made in the spring and some penne pasta from the pantry. 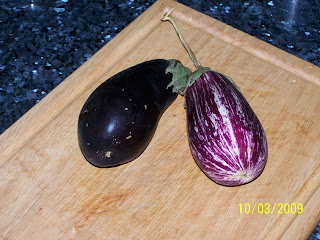 Salted eggplant dripping in the colander. I could have taken more pics of the eggplant process, but it was virtually identical to what was in the link above. 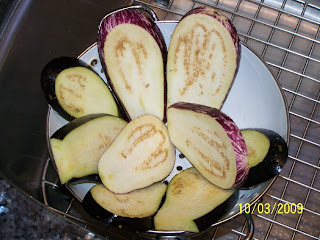 The frying eggplant - not as dark as they looked. 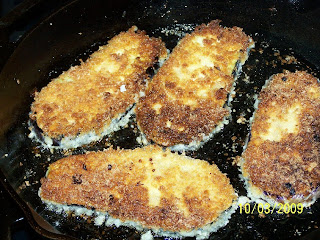 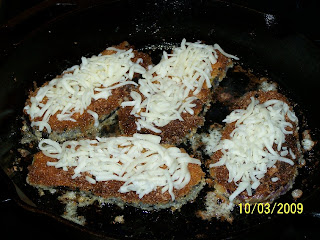 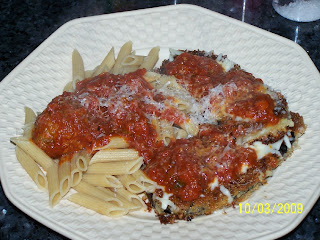 This is one of our favorite meals and it turned out really good.
Posted by Big Dude at 6:59 PM