Life’s Sure Different With An Eleven Year Old Around

For the last 17 years, Halloween has come and gone around here with very little notice. Our kids were grown and we live in the country on a dead-end road with 3 families and no kids – therefore no trick-or-treaters. However, this year, thanks to Alex, the house is decorated and we've had three more young ladies for a sleepover. I spent part of Thursday evening carving pumpkins for the first time in I can’t remember when. Here are some pics of Alex carving her pumpkin and some our front entrance. 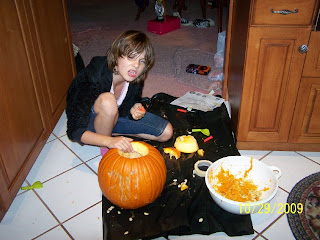 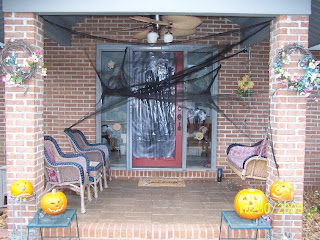 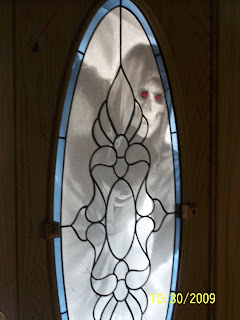 The stairway to their basement lair. 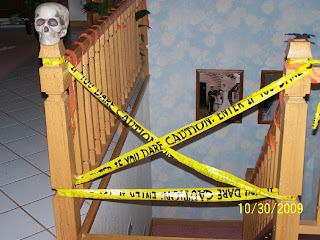 Friday evening it was pizza for dinner – what else for 11 year olds and off to Maple Lane Farm. These people raise several products, especially delicious strawberries in the spring, but one of their big revenue generators each year is the 10 acre corn maze - link. The girls spent an hour plus lost in the corn and when they came home their faces clearly said a good time was had by all.

After they woke us up Sat morning at 3am playing hide and seek, we put the kabosh on the noise. Not sure what time they went to sleep (didn’t care as long as they were quiet), but this is what I found this morning. There are two king sized beds within 15 feet of the sofa. PIC 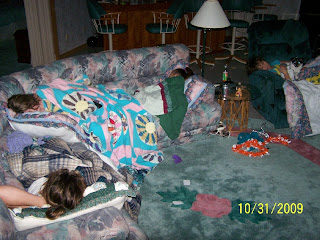 When I was that age, some friends and I slept out on my front porch several nights a week, during the summer, and stayed up half the night. I had a paper route and we would deliver the papers when they showed up around 3 am then hit the sack and get up in time for lunch and then a hard day of messing around – we only stayed indoors when it was raining or we were in trouble for some innocent but obviously misunderstood deed.

When the girls got up at 10:30 Saturday morning (I had hoped they’d sleep til noon), it was Big Dudes chocolate chip pancakes for breakfast, using my special recipe of Aunt Jemima Complete pancake mix with Nestles mini chips sprinkled in the batter and topped with Aunt Jemima Original syrup – I went all out on this meal. Then came a day of watching horror movies and banishment of Bev and I to other rooms, me to the basement for football watching and Bev to our bedroom for a movie.

We whipped up some burgers and fries for supper (not McDonalds but probably almost as good - he writes with tongue in cheek) and off they went to the big city of Greenback (pop. 954 from the 2000 census) for trick-or-treating. I did a little fall grillin on the gasser and my burger had some mayo, a little of my homemade mustard, some Sweetwater Valley Farms smoked cheddar and a couple slices of Clausen Kosher Dills - it went down real easy. 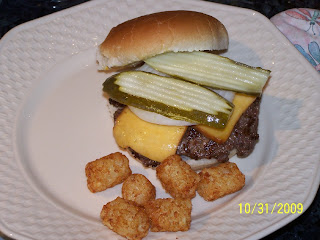 The goblins are Savannah as Bacon - obviously the favorite costume of a foodie, Melissa as the Goth, Alex as the Mummy, Diamond as Alice from Wonderland. While they're gone, I'm gonna kick back and root for the Vols and the Phillies.

Somehow there was a little communication problem as we were planning to take them home this evening after trick-or-treat and they were all planning to spend another night - I think we've been Halloweened.
Posted by Big Dude at 12:17 PM