It rained our first night in Roan Mountain so we awoke to a fog-on-the-mountain type of day which caused us to change our plans as we knew the top of Roan Mountain would be socked in and we wouldn’t see much of the rhododendrons if we went up there.  So we went east so the power shoppers could have their day.


From Roan Mountain, we soon entered North Carolina and traveled thru Elk Park, Banner Elk, Sugar Mountain, and Seven Devils to arrive in Boone.  It is a beautiful little town and I was totally surprised at how big Appalachian State University turned out to be.  It has 17,000 students and a pretty campus that sits beside the old downtown area providing for a thriving business district.  Since it was lunchtime, Bev went on line and found a Greek restaurant with good ratings at a site called boonerestaurants.com and she stumbled into a dandy.


The name of the place was simply Mr.Original Gyros and it was in a small strip mall along NC route 105. 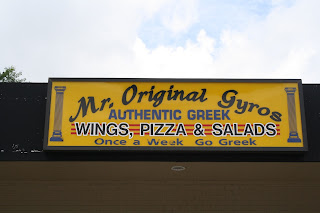 I was concerned when I saw the outside with so few parked cars, but once inside, it was very nicely appointed. 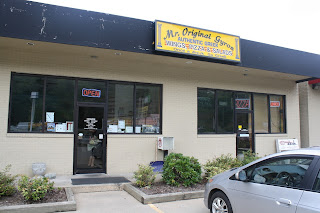 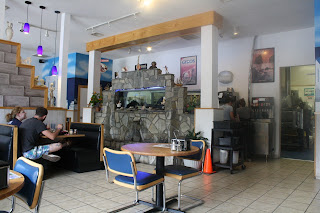 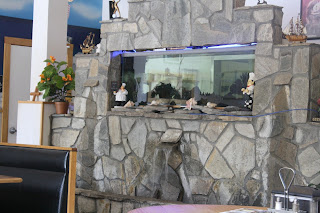 Their sign and our server said it was authentic Greek food and when I saw the little old owner/chef and noticed he spoke broken English, I was mostly convinced.  I ordered a Gyro platter which is described: "Served open-faced with a generous amount of meat" along with “Platters come with a pita and Tzatziki sauce, a Greek Dinner Salad, or soup and your choice of homemade potato salad, cole slaw, fries or chips. For Greek fries add just $2.00 more”.  Bev and Pat split Souvlaki platter described as: "Served open-faced with a generous amount of 100% pork tenderloin" plus the platter description.  We both upgraded to Greek fries which were their homemade fries topped with a tangy sauce and feta.


This was my plate, with the salad on the side and it had a generous portion of everything. 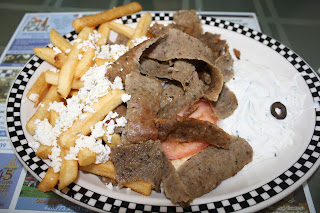 This is the girl’s plate and them. 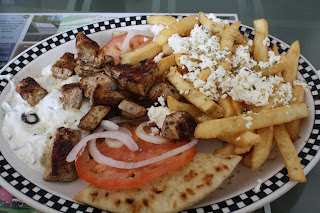 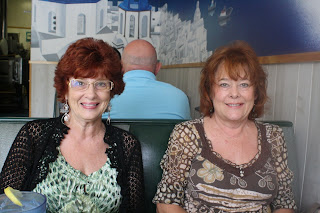 Everything about mine was delicious and I ate all but a few bites of salad and most of the pita (homemade), which was under the meat (the pups loved it as a treat).  And if I wasn’t already convinced it was authentic, when I went back to the kitchen door to compliment the chef, he motioned me in and opened the door to a pizza oven.  He pulled out a pan piled high with oregano form Greece which he was roasting and advised it was the best in the world – it looked very different than what I grow, but after eating his food, I sure wouldn’t argue the point.  The question of authenticity was settled.


One year ago:  Nothing


Two years ago:  Nothing