After the blogger party, we let everyone get away without taking some of the leftovers so we ended up with a 2 gallon bag of potatoes/corn and two 2 gallon bags of crawfish/shrimp.  The first step was to prevent them from going bad before we could use them which I did by freezing the meat.


The shrimp were scattered on a sheet pan with the shells still on, frozen, and bagged.  For the crawfish, I removed the tails, rinsed those that needed it, and froze like the shrimp.  I’ve bought frozen tails already removed from the shells, but I left them on thinking they might hold their flavor better.  This is the pile of whole crawfish and the tails and shrimp to be frozen. 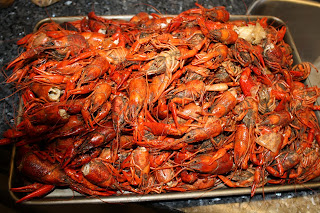 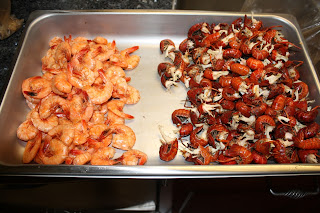 I kept out enough of each for a breakfast meal for me – Bev doesn’t usually eat much breakfast – and I started with the crawfish.

Before cooking I prepped everything and tried several methods to clean the tails.  I first tried cutting the soft underside of the tail with scissors, then cutting the entire tail in half with kitchen shears, and decided cutting them in half with the chef’s knife worked best – all lengthwise. 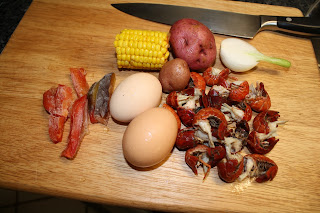 I got some onions, peppers, and potatoes sautéing in olive oil then added some of the leftover corn and green onion. 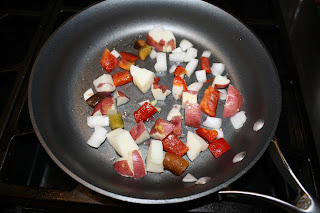 When the potato mixture was nearly done, I added the crawfish and then two eggs beaten with a little half and half and just a little salt and scrambled it all together.  I served it with buttered marbled rye toast and chunked cantaloupe with blueberries. 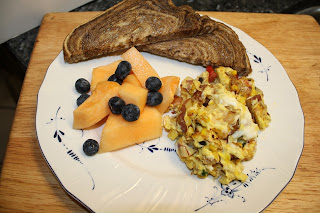 It was very good and had plenty of flavor left from the crawfish boil.


One year ago:  None