Well blogger buddies, you’ve done it again – delivered recipes just when I needed them.  Bev had decided she wanted grilled pork tenderloin for supper and Kathy from A Spoonful of Thyme had just posted a recipe for Disappearing Tenderloin and it sounded just right.

I only had one pork tenderloin but it was pretty large so I made the complete recipe of marinade and left the meat in it for a couple of hours.

After reading Kathy’s rub ingredients and having chili powder winner, Drick, refer to it as a rub, I decided it had enough similar ingredients to try it as a rub for this – first time ever used for something besides chili by me.


I don’t cook pork as done as some so I grilled it to an internal temp of 140* and tented for 8-10 minutes before slicing knowing it would raise to my desired 145*.

After pouring out the grease, I added the leftover marinade to a skillet I’d used to fry some bacon for the slaw, and still had a few bacon bits, and reduced it until thickened.


For side dishes we served our standard bacon wrapped and grilled smashed potatoes and Apple Bacon Cole Slaw from Lynda at Lynda’s Recipe Box, which she'd also just posted the previous day.  Rather than recopy it her, please check out her site for the recipe and photos.


Here’s a shot of my plate. 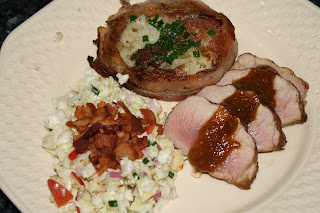 The tenderloin was delicious and about three bites in, it occurred to me that I’d forgotten to add the rub to it and when I told Bev, she said “I don’t think it could have been any better.”  I can’t believe I did that (CRS strikes again) but think the sauce made a big difference and this was a testimony to the flavor of the marinade.

I will definitely try this again with marinades and, after reducing, taste them and use as a pan sauce if they have the right flavor – perhaps with a few adjustments.  So this became a post about the marinade and you should check at Kathy’s post at the above link to read about the tenderloin - WITH RUB.


One year ago:  Brisket, Beans, And Mac