After holding a chili powder giveaway and selecting three winners, it became incumbent upon me to make up a batch and get it sent out.  I buy most of my high-use herbs and spices from Penzey’s and frequently buy the herbs in leaf form, such as thyme, then grind into a powder to fill the spice jars as needed.

I know that since most of them are an annual crop, the best time to buy should be shortly after the crop comes in and I had read that after 6 months they should be tossed in favor of new ones.  This obviously makes no since if it’s an annual crop, then I read that discarding makes no sense at all.  The author pointed out that while they may lose up to 30% of their flavor, it rarely changes to a different flavor, so when they get old, just use more and that really made sense to me.  So I just adjust the additions to a dish based upon the age and my taste and this really, really makes sense to me.

Fortunately, I had enough of everything, but just barely, to make the chili powder and the kitchen island looked like this when I was done. 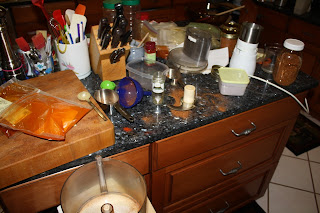 Now I just needed to order some replacements for all those that are gone and get the chili powder in the mail.  I’ve asked all of the recipients to give me improvement feedback.

I hated the first margarita I tasted at a bar and the first ones I made tasted like gasoline or worse.  Once I decided I liked them, I went on a lifelong journey (still on it) to make the perfect one  – which may be different than the one you like.  Each time I went into a bar and enjoyed the margarita, I made sure I became extra friendly with the bartender to see if I could steal a secret or two.

A margarita in its basic form is tequila, orange liqueur, and lime juice.  According to Wikipedia – “There is no solid proof who "invented" the Margarita.[3] The most accepted of all stories is that the Margarita was invented in October 1941, at Hussong's Cantina[4] in Ensenada, Mexico, by bartender Don Carlos Orozco.[5] One slow afternoon, Don Carlos was experimenting with mixing new drinks when a prestigious visitor arrived: Margarita Henkel, the daughter of a German ambassador, who lived with her husband Roy Parodi near the city in Rancho Hamilton. Don Carlos offered the drink to Margarita, and named it after her for being the first person to taste it.[5][6] He concocted a mixture of equal parts tequila, orange liqueur and lime, served over ice in a salt-rimmed glass.”

One of the first things I learned was that the original recipe is not one I cared for and then I discovered that the bartenders in Mexico, where we went, added a splash of Sprite to theirs, which gave them a little more of a lemonade flavor.  The next thing I learned was at a Mexican restaurant in Knoxville that had them on tap and, to order, added them to a blender with just a little powered egg white to give them a little froth and smoothness via a quick blender spin – my secret ingredient.

The next and critical learning was that tequila made with 100% agave, rather than a mix of it and corn liquor, like most cheaper varieties, made a much better drink.  It is not necessary to use the aged versions, reposado and anejo (sipping tequilas) as blanco (clear) is just as good when mixed with the margarita ingredients.  Herradura, cooked in traditional clay ovens, is by far my favorite, but it has become too expensive for regular use, so I now use Hornitos which is made by Sauza and on occasion I splurge on Herradura.

The thing that contributed most to my current recipe (after several previous ones) was the use of Mayson’s Margarita Mix - On The Rocks, which I discovered at another Knoxville Mexican restaurant. 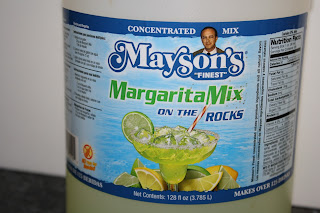 They used Mayson's, orange juice, and Tequilla, without orange liqueur, to make theirs.  I like the orange liqueur in mine so my mix, in a gallon jug is: 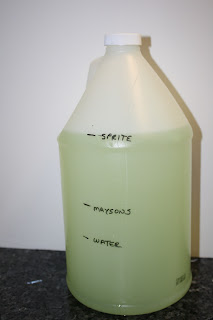 For the drinks themselves, I add the following to a blender:

4 oz of triple sec
18 oz of mix
Powdered egg white - A little squirt – you’ll quickly know how much to use when you over-add and have a get blender full of meringue. 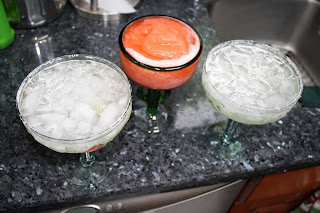 If you like them a bit sweeter, add more Triple Sec (I noticed some doing this at our blogger party) or less Mayson’s with the water to get the taste you like.  If you want to be sure you taste the tequila, add more of it.  I like mine to taste a little like lemonade and be weak enough that I can drink more of them before I can’t stand up, but even they will sneak up on you – and have on too many occasions.

For fruit ritas (strawberry, peach, etc), I use the made up margatitas, and add the fruit, then ice, then rita to cover and blend, adding more blend or ice to get the consistency I want.  I also make a blend of ice, rita, and virgin pina colada (cream of coconut and pineapple juice) to make Coco-ritas, which Bev loves.

One year ago:  None