The Definitive Word On Tequila For Margaritas - Blogger Party

Last Reminder - We need a May 5 RSVP for the Blogger Party.


Last June I posted about making my margaritas and I thought I’d done one about tequila but couldn’t find it, so here are a few basics.  I see the world as having three categories of tequila:

1. Made from 100% agave and cooked the old fashioned way in brick ovens to soften prior to juice extraction – adds a little roasted flavor.

2. Made from 100% agave and cooked in a stainless autoclave to soften.
3. Made from a mixture for agave and grain liquors.

Surprisingly, many of the more famous and less expensive tequilas are in category 3 such as regular Jose Cuervo - they won't say "100% Agave" on the label.

Most brands have tequilas of three main types due to age:
Myth – tequila has a worm in the bottle, but it’s actually Mezcal that does.

In general, margaritas are made from blanco as the superior and subtle flavors of the aged varieties get lost in the other ingredients.  The high end Anejo’s are preferred for drinking straight as like most liquors they are smoother.

My basic margaritas (the ones Joe and I consume) are made with Sauza Hornitos (100% Agave) tequila, Montezuma Triple Sec, and my mix.  However, a friend recently gifted me a bottle of Avion Silver Tequila which she says is the best and Avion's site says it’s due to the special Blue Weber Agave used to make it – don’t know if it’s a category 1 or 2, but suspect 2.

My go to premium tequila has been Herradura (category 1) for a long time so when Joe came over, a taste test was in order, at least for the first margarita – I can’t afford to drink these full time.  The test had six difference versions using the same ingredient amounts in each. 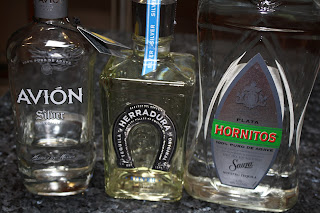 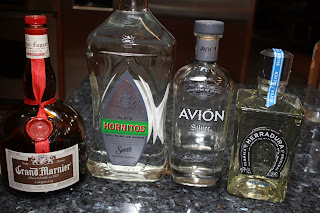 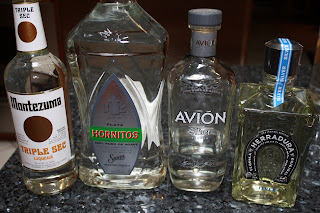 I was pretty sure 4 & 5 would be preferred but wanted to see if the tequila rating was the same in both.

As can be seen, the premium tequilas came out on top, as expected, and I was a little surprised that we all thought those with Grand Mariner were a little too sweet for more than just one drink.  Maybe I just need to use a little less of it than triple sec.  I’d planned, but we forgot, to taste them straight before the Avion was gone.
.
From my perspective, the good tequila flavor was more obvious with the Avion and Herradura over the Hornitos.  While the Avion is a very good tequila, I still prefer the Herradura as it has a unique smoky flavor that I think comes from cooking in the brick oven.

So now you know what to do from here:


Okay, so maybe this wasn’t THE definitive word on tequila , but it was some words and a fun little event for Bev, Joe, and I J