Our fourth blogger party took place on May 26, and we had good weather, a good turnout, and of course, plenty of good food.  I’d asked Meakin Hoffer to be the event photographer and Sam Hoffer (My CarolinaKitchen) to do the official post for it, so mine will just be about the food I provided and the cocktails we served (later post).  These are all Meakin's photos which is why they look better than my normal ones.  Check out Sam's blog for her post.

Chris (Nibble Me This) served as the menu coordinator for the event and suggested I smoke an appetizer of pork ribs using the recipe from Chris Lily of Big Bob Gibson’s BBQ and TV BBQ show fame.  I began with his recipe for Sweet and Spicy Pineapple Ribs posted on line at Grilling.com, then amended  the marinade based upon new information in his cookbook as follows: 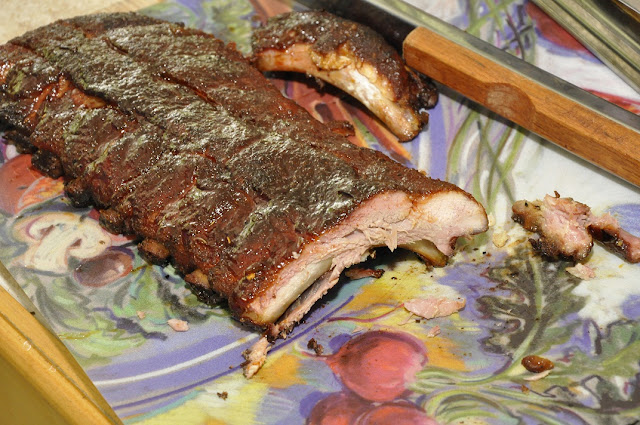 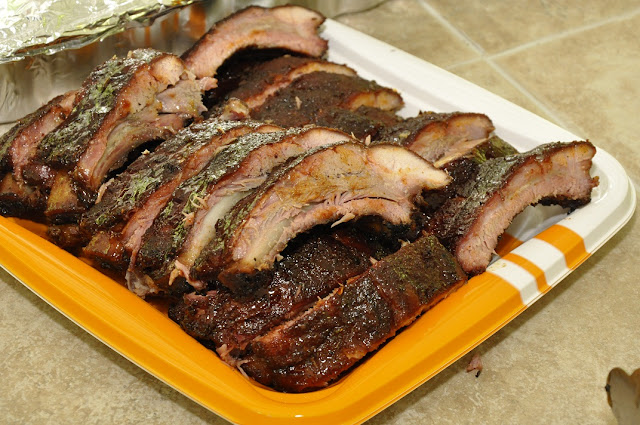 Even though they were a little over-cooked by competition standards, the falling-off-the-bone-tender ribs (which most people prefer) were a hit and I’d use this recipe again.

Per Wikipedia - "Kālua is a traditional Hawaiian cooking method that utilizes an imu, a type of underground oven. The word kālua, which literally means "to cook in an underground oven", may also be used to describe the food cooked in this manner, such as kālua pig or kālua turkey, which are commonly served at luau feasts."  Interestingly, the vast majority of on-line recipes I saw were for a crock pot.

We discussed cooking a whole pig, but even in a smoker, it was way more work than I wanted to do plus being three times the cost of pork butt.  After lots of online looking, I discovered that Kalua Pork was pretty much just salt for seasoning and cooked with banana leaves and Koa wood.  This is what I did:

1. Remove nearly all surface fat, score ¼“ deep in a diamond pattern and rub about 1½ T. of sea salt over the roast (closest I could get to Hawaiian salt). 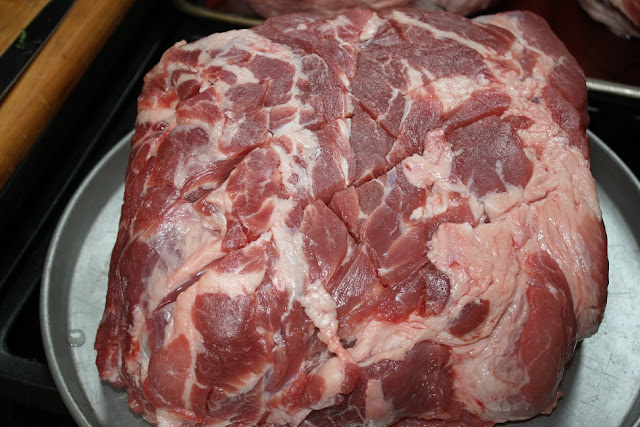 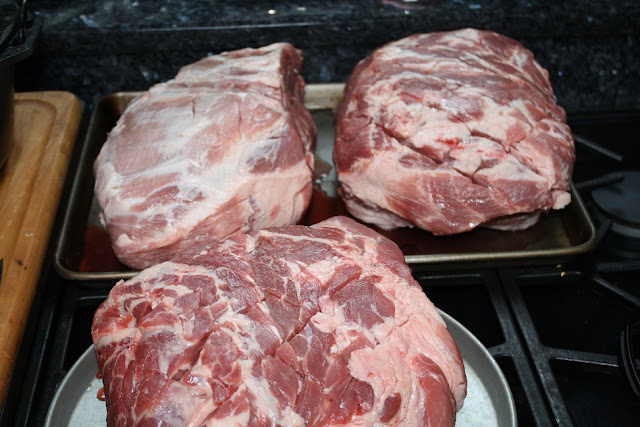 2.  From a trial run using pork loin, I found that the fresh banana leaves were too crisp to easily wrap the meat without splitting so I cut them that morning and let them lay around the house all day to soften up. 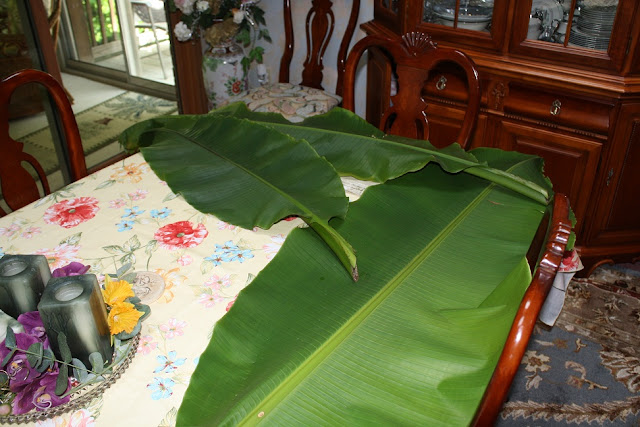 I wrapped the butts with banana leaves, leaving gaps for the smoke to get in, and secured them with kitchen twine. 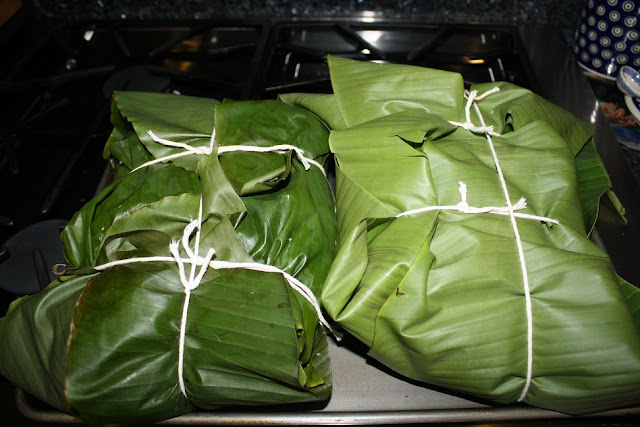 3. They cooked for about 10 hours in my Stumps smoker using Stubb’s charcoal and banana tree wood (it’s not exactly wood though) for smoke.  When they got to an internal temperature of 175*, I wrapped them in foil and cooked to around 203*, then pulled and put them in a cooler until meal time (about 3 hours).

4. To serve, I removed the foil, the leaves, and placed the whole butts on a pan lined with a fresh banana leaf for folks to pull off a hunk to eat.  It helps to have a banana tree (hardy variety - no fruit) when you're throwing a luau. 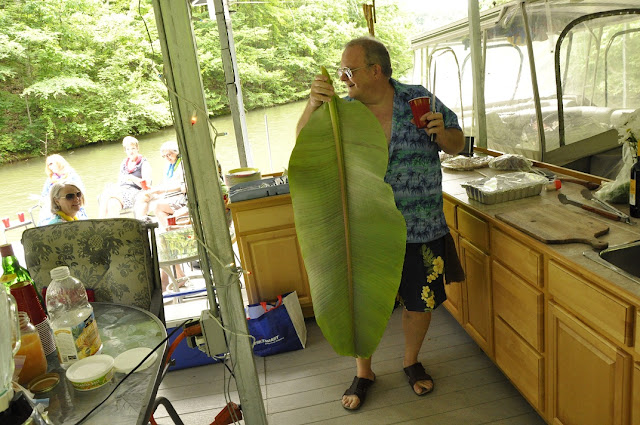 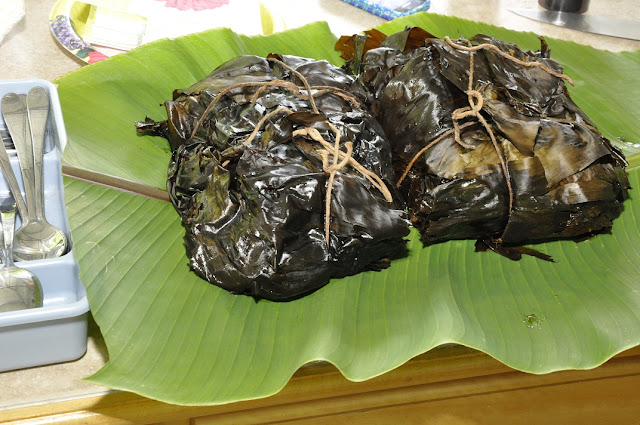 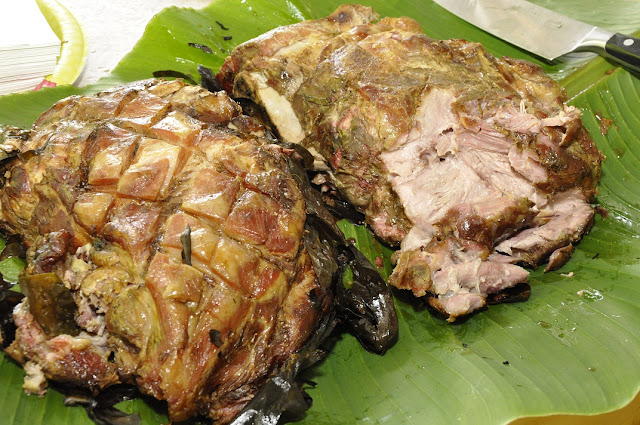 The pork butt was tender, moist, and very tasty, but it was basically just roast pork with a little bit of a unique flavor – very different from my normal BBQ but I enjoyed it and we have plenty of leftovers for other dishes (I cooked three butts and we only ate one and one half).

Want to see something really cool, check out this article about Chris and our blogger parties in the May 26 addition of the Knoxville paper.