Swimming With A Dolphin For Madison

During our trip to Palm Beach, FL, we visited Marineland so Madison could swim with the dolphins.  It is located south of St. Augustine and only about five minutes from where we were staying with friends, David and Peggy, at Palm Coast.

“Marineland of Florida” opened in 1938 as “Marine Studios” and had 30,000+ guests the first day.  In the fifties, it was the most popular tourist destination in Florida.  Through the years, other attractions opened, storms hit, the facility and visitors declined, and it fell on hard times.

In 2004, it began to transform itself into “Marineland’s Dolphin Conservation Center” which opened in 2006 and is focused on education and intimate animal-human interactions.  In 2011, it was sold to Georgia Aquarium and now has some good financial backing.

They don’t really have shows like you might see at Sea World but focus on learning about and swimming with the dolphins, however the dolphins do put on quite a show before and during the swimming part as can be seen from some of my shots, such as the header.

Madison’s group consisted of four kids and one adult (one kid’s dad) and their event began with a 30 minute orientation where they were told about the dolphins in the tanks and how they trained them (one of them was born in the late 50's).  Then it was into the pool to be up close and personal with one of them with each swimmer getting equal time and making the motions the trainers use to get the dolphins to respond.

The first set of shots and the header were taken when we arrived and while the swimmers were in orientation – I was pleased the shots thru the tank glass came out so well. 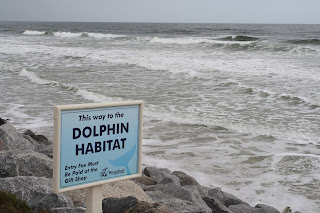 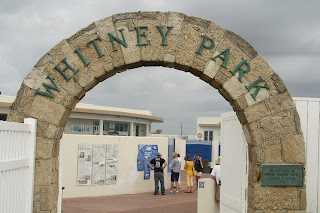 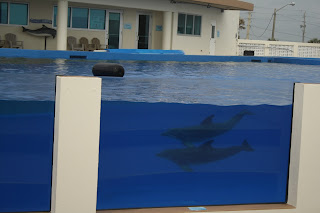 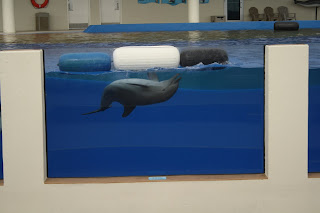 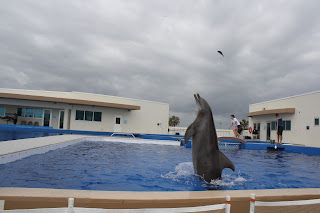 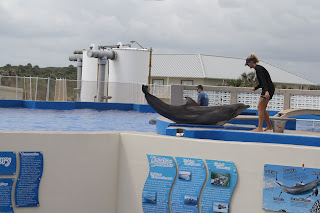 These are shots during the swim session which lasted about 30 minutes.  Madison, the redhead, declined a wet suit and learned a valuable lesson in the 70* water – she looked pretty cold the whole time. 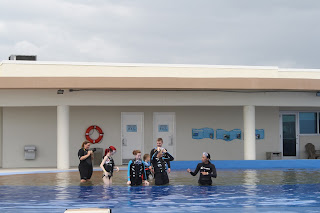 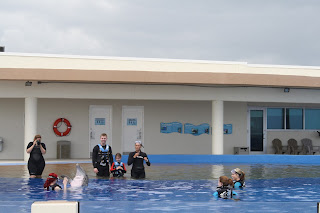 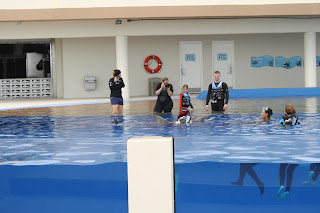 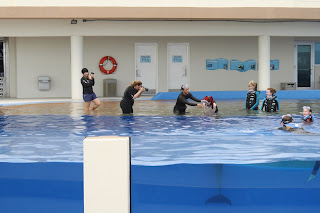 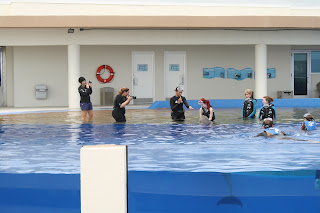 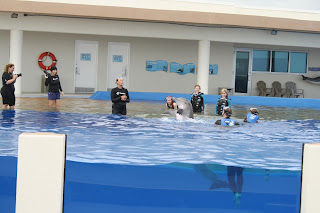 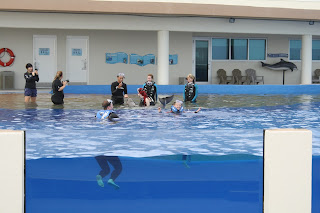 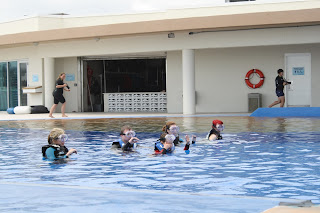 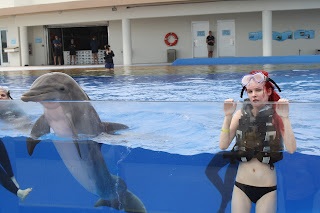 They were supposed to be closer in the last shot but Madison didn't get into the middle of the glass.

She seemed to have a great time and I believe it was a memorable experience.  I carped a little when Bev said it was $200, but after seeing the experience the kids got, it was worth it and it must be popular as there is a two month waiting list during the summer.