I’ve said many times that my favorite cookbook is your blogs and I have way too many saved, which is why I’ve been trying to make them soon after your posting so they don’t get lost.  When I saw these two recently I immediately put them in the schedule and it worked perfectly as storm Yogi was moving thru and it was too rainy to work outside.

Dennis from “A Culinary Journey With Chef Dennis” commented that he is not a big fish eater, but his dishes always look sooo good and his Sea Bass With Shrimp In Lemon Scampi Sauce is no exception.  Check out his fine blog for some great photos and the complete recipe, which I followed (except the screw up) and I subbed crappie from the freezer for the bass.

The vegetable and starch part of the meal came from the salad which was inspired by Tricia’s post over at Saving Room For Dessert for Vegetable Nicoise Salad – check out her very nice blog for the recipe and great photos.

I’d never had the salad so did a little research to discover that there are several versions but it’s basically greens and vegetables (green beans and tomatoes for sure) topped with tuna, anchovies, and a vinaigrette and since mine has no tuna or green beans, I’ve called it a nicoise-like salad.  I used the vinaigrette recipe from Simply Recipes as it was very similar to Tricia’s but contained shallots, which I like.

1. Bring potatoes and 4 quarts cold water to boil in a large pot.  Add 1 tablespoon salt and cook until potatoes are tender.  Transfer potatoes to a medium bowl with a slotted spoon (do not discard boiling water). Toss warm potatoes with 1/4 cup vinaigrette; set aside.  I used the same bowl to toss everything.
2. Bring the water to a boil again, add the asparagus, and cook for 3-4 minutes (depending on size), remove from water with tongs and add to an ice water bath to stop the cooking process.  When cool, dry and toss with 3 tbsp. of the vinaigrette.
3. Toss the lettuce leaves with 2 tablespoons vinaigrette and arrange them on a platter.
4. Gently toss tomatoes, red onion, 3 tablespoons vinaigrette, and salt and pepper to taste.
5. Arrange everything on the lettuce bed and drizzle the eggs with vinaigrette.  Sprinkle entire salad with capers (if using), any remaining vinaigrette, as needed, and serve immediately. 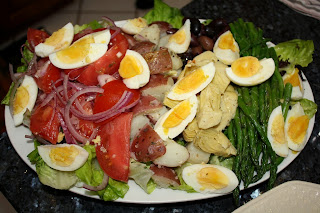 I had too much stuff for the platter so it wasn't very pretty.

Plate the fish and let everyone serve the salad to themselves. 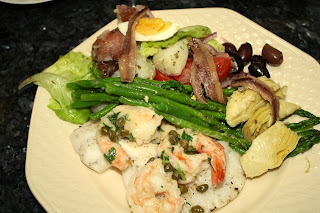 I really liked both dishes, but the fish wasn’t as good as it would have been had the cook done it right.  The recipe was for two servings, but I had fish for five and failed to triple the sauce recipe – duh.  I'd like to say that I had too many things going on at one time or that the cooking happened after a tequila taste test (details in a later post), but the reality is I laid out and printed the recipes while sipping my morning coffee in the peace and comfort of my chair.  Sorry Dennis, but I’ll do better next time.

I had salad the next morning for breakfast and while the lettuce was not as crisp, it was more flavorful than for supper.  Next time, I think I'll go with halved cherry tomatoes, which was my first instinct for this time and make it an hour or so before serving.