A few days ago we made a trip down to Benton’s Country Ham’s to get bacon for our BLT's and Bev requested some bologna as well.  In addition to their famous bacon and hams, they have a little meat case and sell good sliced to order products like cheese and Lay’s bologna - I had them slice me a few heavy ¼ “ slices.

For breakfast, Bev had a fried bologna sandwich and I had an egg dish of course.  While I toasted a slice of homemade bread, I fried the bologna and topped it with cheese after flipping.  I cracked an egg into another pan and topped with some diced Vidalia onion, which cooked a little after I flipped the egg.  Here’s what I ended up with and it was delicious. 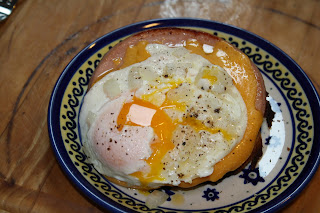 The previous night, we had our second and final dish of killed lettuce and it was the entire meal, enjoyed down on the dock. For those not familiar with the dish, it’s made from leaf lettuce topped with a dressing made from hot bacon grease which kills (wilts) it.

For this dish, the lettuce included green onion and the dressing was made from bacon grease, olive oil, and vinegar which were all heated together.  After pouring this over the lettuce Bev drizzled on some balsamic vinegar added some chopped bacon, hard-boiled egg, and grated parmesan.  She usually adds some beaten egg to the dressing to provide a little thickness to it, but she decided to give this a try - back to the old way next time.

She was hungry and didn’t get the dressing hot enough, so it turned out to be more of a wounded, than killed, lettuce.  The flavor was the same but the lettuce was hardly wilted. 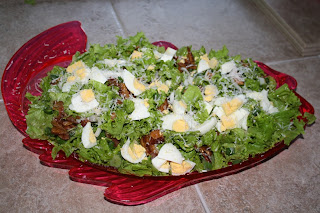 All photos can be enlarged by clicking on them.
Have a great day and thanks for stopping by Almost Heaven South.
One year ago:  Grilled Shrimp And Cheesy Potatoes