Thanks for tuning in for Post 2 about our Blogger Party – look back to Post 1 for the list of attendees.  Shortly after the fajitas, we served the main meal and I don’t think I took another picture, but here are some that Ross Ramsey sent me and hopefully some of the other bloggers took some and will post them.  These first three are of the fajita appetizer Chris cooked as a demo – I discussed them a little yesterday. 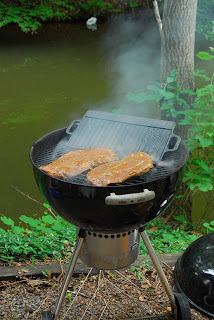 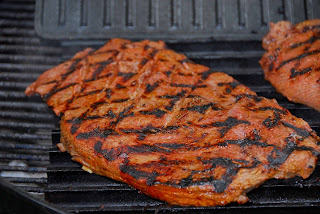 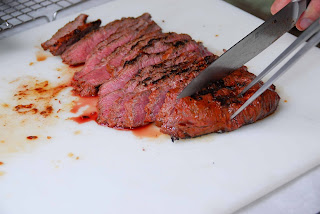 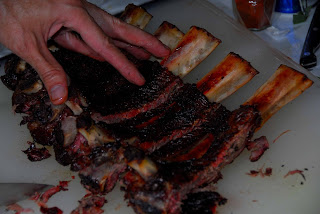 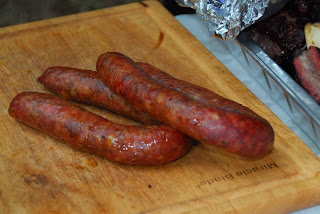 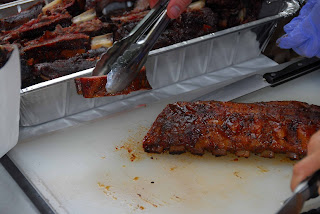 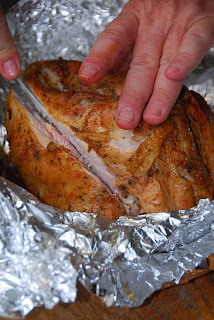 And if this was not enough for you, there was key lime pie, banana pudding, brownies, and almond limoncello cake, provided by the Ramsey's, Aucoin's and Hofer's.

Laurie kept us going before the meal with a big bowl of her Chex mix, made with plenty of butter and garlic and we washed it all down with margarita’s, sangria, and an assortment of beer, wine, soft drinks, and tea.

I suppose it was possible to have had a miserable time, but virtually impossible to leave hungry.  I stuck with traditional Texas BBQ and ate brisket, sausage, beef ribs and turkey - pork ribs are a Southeastern thing.  I thought all of the meat was very good except the sausage was a little too salty, so I'll have to recheck my spice to meat ratio.  So my meal looked as close as what we had in Lockhart as I could get it - unfortunately, I got no photo - just try to picture it in your mind - the four meats on the butcher paper, with two hands to hold it and a slice of bread laying across the top.  I didn't have room for any of the sides, but after a rest, I had a little taste of the desserts and they were all excellent - thank you to those who brought them.


After eating, Ross gave us some great photography pointers and demonstration – it never ceases to amaze me how much talent and knowledge is contained in the folks around us all of the time.  This is a shot, thanks to Laurie, of Ross and Chris trying to train an old dog to take a picture of a bowl and have it look the same as my eye is seeing - not sure I'm trainable. 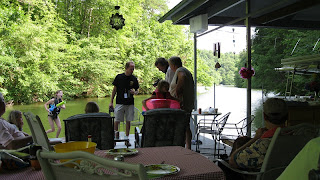 Note the water battle raging around us - as you can probably tell, things are pretty formal at Almost heaven South.

Chris is linked into the owner of the company that makes Grill Grates and arranged to get a set for a door prize, which was won by Sam Hofer after guessing the closest to how many charcoal briquettes were in a plastic container.  No way to cheat as your reaching in to count them would have been quickly disclosed by your black hands.
We finished up the party with an evening cruise on the pontoon boat – it’s never before had its maximum load of 15 people, but we didn’t sink it even though there was one brief attempt.
I had an absolutely great time and hope the others did as well – I’m concerned Chris might not have had as he was working way too hard for most of the day.  Since I was able to start my cooking the night before, by 11:30am, I was able to get all of my food cooked and in the 150* oven to stay warm until serving time, but Chris did his cooking after he got here and thanks to a thunderstorm at his house he started a little behind.  Between the beef ribs and sides and a fajita cooking demo, it kept him really hopping until we ate.  It was nice that, co-Kingsford Griller Robyn, was here to assist him with the fajitas.

In addition to the great door prize, Chris also made up some cool name tags, which many folks commented they really appreciated.
And to top it all off, the weather was nearly perfect as it was a little overcast, which kept the temps down, with only brief sprinkle, even though there were serious thunderstorms just a few miles north of us.
In case you’ve ever wondered what H Dog Heaven looks like, I think this could be it - great shot Ross. 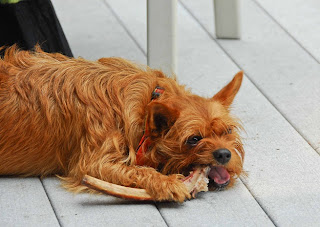 After everyone else left, Sam, Meakin, Bev, and I retired to the house.  Last year, they had to leave the blogger party early to make the trip back across the mountain so this year we invited them to spend Sunday night with us.  Had they made it, Jackie and Dave Scott were planning to spend a couple of nights with us as well.

We ended up sitting on the sun porch and getting to know each other until nearly midnight – I know I’m having a good time when I stay up nearly 3 hours past my bed time.  They had brought us the perfect gift – for me a least, a book by Cheryl and Bill Jamison, titled “A Real American Breakfast” – Sam obviously reads my blog.  The Jamison’s are also the authors of the popular “Smoke & Spice” barbecuing book, which I also have.  I'll be looking hard for meals made from leftover BBQ everything.

Next morning, it was coffee, a BLT, with or without an egg, and some fresh picked blueberries & purchased raspberries.  The BLT was on homemade bread, with Benton’s bacon, our garden lettuce, a locally grown tomato, and Duke’s mayo.  I thought about something fancier, but a good BLT is just hard to beat.

After breakfast, we toured around the grounds and talked veggies and shrubs.  Then we gave them a goodie bag of fresh pulled sweet onions, a head of red cabbage, green and yellow filet beans, and a quart of mater juice, and they headed off to Benton’s (it was on their way home) to lay in a supply of bacon for Meakin’s father – at least that’s what they told us.

I don’t know if we’ll have Blogger Party 3, but if we do, I’m already thinking about a menu – maybe a shrimp and/or crawfish boil, where you just cook it all up in a big pot or two and dump it out on the tables.  I know some folks who live in Seymour that I’m sure could supervise and assist us into a great meal – what do you think Katherine?

Please come back one more time for Part 3.

One year ago:  Fathers Day Greekfest