After the blogger party, we ended up with plenty of leftover BBQ and decided to start putting it to good use.  I had stripped the meat from Chris’ dino ribs (beef ribs) and we decided on a burrito for it.  Bev added a few tablespoons of the leftover brisket broth to the meat and warmed it slowly in a covered dish in the toaster oven.  When it was warm, it went onto the tortilla and was topped with some of Robyn’s leftover fire roasted salsa and shredded cheddar cheese. 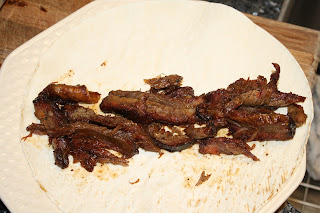 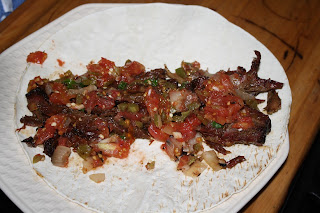 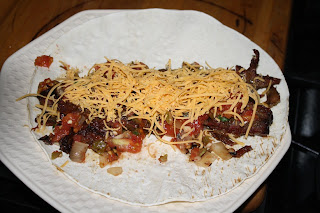 Then I rolled it up, added some more cheese and diced onion and nuked it to melt the cheese. 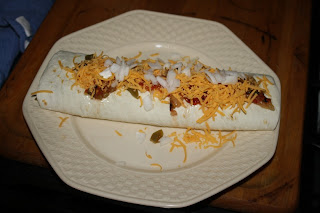 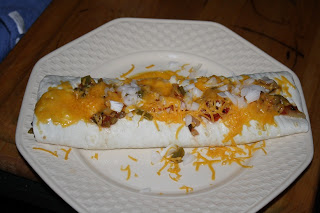 Chris' beef coupled with Robyn's salsa made for a delicious burrito and the only thing I wish I’d had to add was some fresh cilantro.  You can tell I made this one as it's pretty bare - the next day Bev made one fro breakfast and it was her usual with lettuce and tomato and a fried egg drapped across everything.
A while back, Bev had found a Cuisine art ice cream maker at too good of a deal to pass up and since we rarely make large quantities, these machines are perfect for us.  Since two grandkids are here and she bought her first ever vanilla beans a few months ago, she whipped up a batch to have for dessert.
She put the ice cream maker part in the freezer and made the ice cream mixture that morning using the recipe from Cuisine art, but it was pretty much this one from Amateur Gourmet with a little different portions.  Her ingredients were:
2 ½ cups whole milk
2 ½ cups heavy cream
1 whole vanilla bean (about 6” in length)
3 large eggs
4 large egg yolks
1 ½ cups sugar
2 tsp pure vanilla extract

Both Bev and I grew up on homemade ice cream that was really ice milk, but this stuff was rich, decadent ice CREAM and I loved it.  Bev thought she liked the other version better, but I like them equally well.   Here’s a picture of my second bowl – it was dirty and it was even dirtier for bowl three. 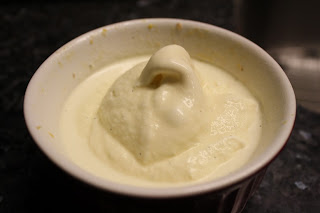 I used to work with a guy with a similar view of homemade ice cream to mine – for the rare times when you eat it, eat all you want.  Thirty years later, I still agree with him and three small bowls were just perfect.


Our good news is that son Rhett is home several months early from a dangerous Afghanistan assignment to get ready for his new assignment as a battalion commander at Fort Bragg, NC.  We are very happy to have him back safe.  Our other son Eric has completed his move to the Baltimore area and they are getting their new home organized - we'll miss having them nearby.
All photos can be enlarged by clicking on them.
Have a great day and thanks for stopping by Almost Heaven South.
One year ago:  Shrimp And Veggies At The Dock
Larry
Posted by Big Dude at 4:27 AM