The youngest Walker child, Riley, has PKU, which means she has to be very careful about the amount of protein she eats – it used to be zero.  Fortunately, hers is not as bad as some and it’s improving as she gets older, so she can eat a little cheese for example.  One of the nice things about her being here is we eat healthier.


For this meal, it was leftover brisket from the blogger party, mac & cheese (some made with less cheese for Riley), and fresh picked green beans.  I was too busy to notice during our blogger party, but even left over, this may be the best brisket I’ve cooked.  I began using smaller choice briskets from Ingles rather than the larger, often select grade I’d been getting from Sam’s and Walmart.  I also adopted Chris Lily’s cooking method and will stay with this until someone can show me how to make them even better. 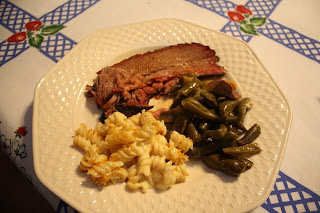 The beans were some Lazy Housewife pole beans that I grew from seeds given to me by Diane over at Voice In The Garden. According to SeedSavers Exchange they were “Introduced around 1810, this is one of our oldest documented beans. Named Lazy Housewife because it was the first snap bean that did not need to have the string removed. Vines bear heavily and continuously until frost. Straight 5-6" long pods with distinctive shiny white seeds. Pole habit, snap or shell, 75-80 days.”  I believe I let them get too large as they required stringing and they were a little tough when Bev broke them.  She cooked them up with our standard smoked country ham hock for several hours (just like Mom did) and they turned out very well.  The flavor reminded me of our favorite Blue Ribbon and like most pole beans, they had a good sized bean (white) in them, which I prefer.  Thanks Di and I’ll save some to grow next year.
All photos can be enlarged by clicking on them.
Have a great day and thanks for stopping by Almost Heaven South.
One year ago:  Two Days Of Barbecuing And Gyro Omelet
Larry
Posted by Big Dude at 4:33 AM