I posted recently about our day trip to Cumberland Gap with a side trip to Dutch Treats in Rose Hill, Va. While we were there, my son, Eric, ran into a member of his congregation (he’s a Methodist minister – a circuit rider with 3 churches) and later as we talked, he mentioned they owned a gas station/ convenience store that also sold frozen bison meat – their small herd was across the road. So we stopped on the return trip and bought a package of bison short ribs and a few packages of bison burger.

I’d never made stuffed hamburgers and had been planning to use the last of the chipolte pimento cheese (yep, it’s still good) for this purpose, but since I had the bison, I used it rather than beef. For my burger, I made two 3oz patties, spread one with the pimento cheese, some chopped onion, and some crumbled crispy fried bacon, then topped with the other patty and sealed the edges. I seasoned the outside with a little salt, pepper, and Tiger seasoning. For Bev and her sister to share, I made an oblong burger from the remaining 11 oz of meat and stuffed and seasoned it the same way – we had hoagie rolls but no burger buns. I tried to make it so the cheese wouldn’t run out when we cut it. 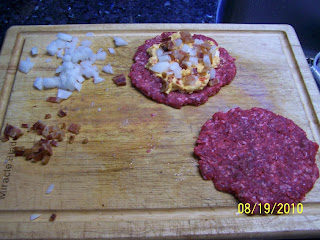 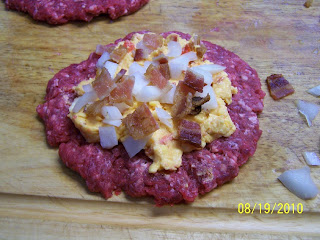 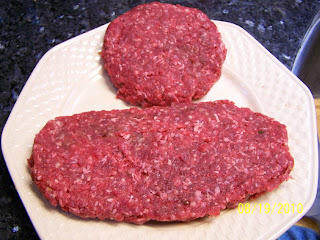 I grilled them to about 130* internal temperature and ate mine open faced on a piece of Naan bread – needed something to absorb the juices – and put theirs on the hoagie roll which they then split. 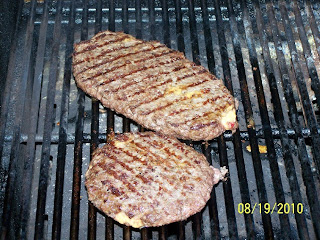 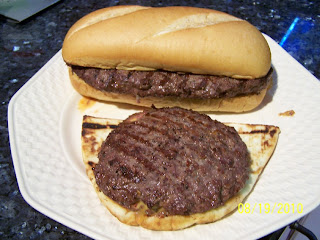 We sided it with some reheated leftover cheesy potatoes, also with a little crumbled bacon sprinkled on top. I cooked up about 3 pounds of bacon, using the grill as an oven, this afternoon, so we’d have it for a variety of uses without having to cook a few pieces at time of need – a BLT for example. We store it in the fridge in plastic bags, then just nuke it for a minute or so when needed and it’s just like fresh fried, and only one mess to clean up. 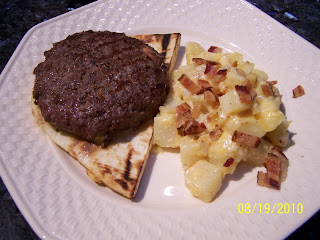 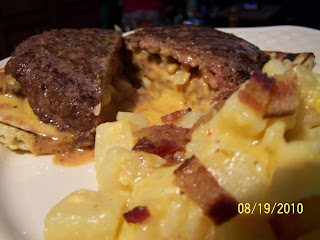 I loved every part of my meal but with so much stuff on/in the burger, I don't think I could tell it was bison - I could tell it was a delicious stuffed burger though. Next time it will be just the basics to see if we can tell the difference between beef and bison, but at $4+ per pound, it'll probably be just an occasional novelty dish. I think I'll call my beef raising neighbor and suggest he consider a switch from cattle to bison.