A Day Trip And Delicious Sandwich

We made a little day trip to Cumberland Gap, Tn the other day, with some friends, for lunch at Webb’s County Kitchen (our second visit) and our son, Eric, daughter-in-law, Ann and granddaughter, Sophia, who live nearby, joined us as well. While there, we walked around town and I took this picture of the still turning water wheel for the old gristmill that is now a B&B. The owner is trying to find someone to help her turn the functioning wheel into electricity - I would think some green industry company or college professor would be all over this. The stream comes right down from the mountain just yards away so I assume it’s spring fed. It must be cold as the little pool in front of it is full of Rainbow Trout, a couple of which I wouldn’t have minded having for dinner. 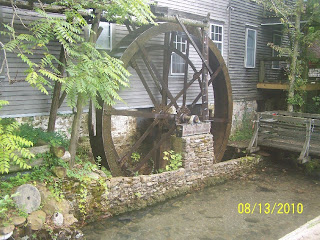 We also went out to Rose Hill, Va., population 714, to a little Mennonite store and bakery, called Dutch Treats, for some sweet baked goodies, cheddar cheese, and we got a loaf of jalapeno bread, which I‘ve commented on in a previous posts. The bread had a mix of cheese and peppers rolled up inside as well as some peppers on the outside, giving it a nice heat level. They have an assortment of Amish/Mennonite goods (mostly from Pa. & Ohio Dutch country), but they do all of the baking on site.

We’ve been eating on the bread the past few days and since I was on my own for lunch, I decided to turn a couple of slices into a grilled cheese sandwich, which I’d been wanting for over a week. I stuck with a pretty basic sandwich – their bread and cheese, a little thin sliced red onion, and some Dukes mayo. I put butter on both sides and grilled with a lid on to make sure the cheese would melt. It was outstanding and satisfied my craving - it’s amazing how much enjoyment such a simple lunch can provide. I thought it also looked delicious, but unfortunately neither of the pictures turned out.

Finally, I had saved the drippings and some biscuits from a country ham and biscuit breakfast, over the weekend, for use as biscuits and red eye gravy. The last time I made the gravy, Bev complained that she didn't get to sample it. So yesterday morning I fried up the last couple of pieces of ham in the saved drippings, added 3/4 cup of coffee, and put it over the re-heated biscuits. Bev's chance for a taste resulted in the following: "the stuff looks awful and it tastes awful too, I can make better ham gravy than that." I guess it's not for everyone.