For years, I’ve been wanting to make crepes, but for some reason have been hesitant to try – perhaps because it’s French and therefore must be difficult. After seeing them made several times on TV and being further inspired by Steph over at Plain Chicken, I decided to try her manicotti method. I made the crepe’s using her recipe and the manicotti using her recipe with the addition of some homemade Italian sausage that I discovered in the freezer.

For the crepes. I used an 8” non stick skillet and brushed on a little olive oil for each crepe. I found the key was to get the batter whirled around in the pan quickly, then cooked as Steph described. They were incredibly easy to make and I’ll now look forward to more crepe dishes. I made them up early in the afternoon and kept them covered so they wouldn’t dry out. I got 8 from the recipe using a pretty full ¼ cup dry measure cup.

For the stuffing, I had 1 ¼ lb of the sausage and browned it all in a skillet and drained it on a paper towel. I used about ¾ lb of it in the stuffing.

Steph’s recipe called for a jar of your favorite sauce, but remember that tomato sauce I made yesterday, I turned it into my homemade pasta sauce by the following recipe. I basically used the spice package and substituted the pre-made sauce in place of the tomatoes and paste. I also omitted the sausage since I was adding it to the stuffing.

· In a large pan, heat olive oil and saute the onion, garlic, celery, and carrot until all are soft (about 10 minutes)
· Add 1 quart of tomatoes and bring to a boil.
· Remove from heat and puree in food processor or use emersion blender. Return to pan.
· Add remaining tomatoes, tomato paste, spices, and meat.
· Simmer for 2 hours.
· If too acidic for your taste, stir in butter (can also add a little sugar).

After cooking, I used the trusty immersion blender to puree the veggies. I was watching “Diners, Drive-ins, and Dives” the other night and this lady was making mole sauce and after cooking everything, she pulled out an immersion blender that was about the size of a trolling motor – it made short work of the job. She was making 15 gallons and Guy suggested she just mount a small outboard motor to the side of her pot.

Knowing the sausage increased the volume of the stuffing, I couldn’t use the recipe amount, so I measured out eight equal piles of the stuffing before starting and ended up with about 3/8 cup each. 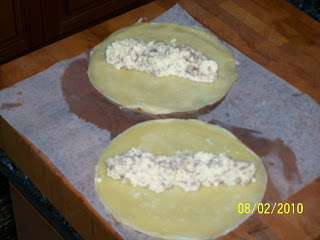 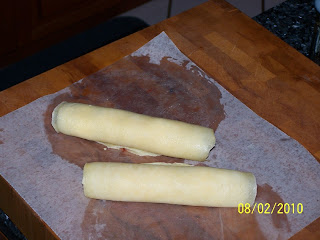 After I got the big casserole dish all ready with sauce, Bev came in and said why don’t we use these and I agreed it would make them sexier to have individual servings. 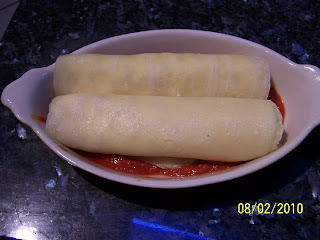 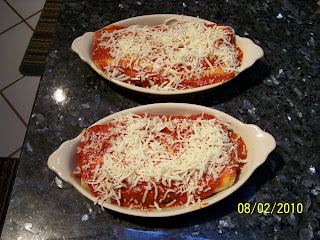 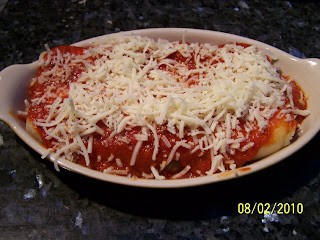 I decided it would be easier to put them in a larger pan and cover with foil rather than try and cover each one - we only had three of the larger dishes. 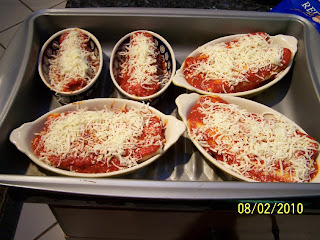 Add a little fresh Parmigiano Reggiano and it’s ready to eat, along with a little Caesar salad. 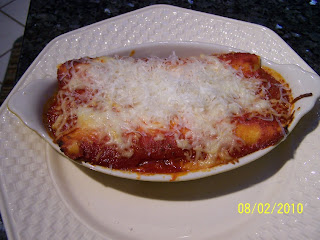 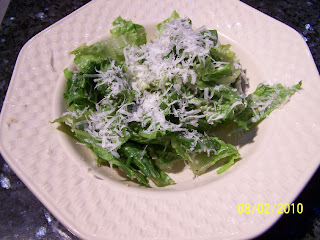 It was delicious and thanks Steph for the recipe, the crepe idea and the motivation. Didn't think about this until later, but with home made crepe, sausage, and sauce, I’d have to go into the cheese making business for it to be more of a homemade dish. Next time, I might add a little fresh basil to the stuffing.

Have a great day, stay cool, and remember to vote, if you live in Tennessee. Thanks for stopping by.