We had one more serving of leftover mac & cheese and I decided another breakfast meal would be a fitting end to it. I’d seen some smoked bologna in the meat drawer and my plan was to slice and fry it then top with the macaroni then an egg, but alas it was past it’s expiration date – the pups will enjoy it. But I did discover the leftover Italian sausage from the manicotti dinner so I nuked it along with the pasta. It felt like a two egg morning and here’s the dish – this may be my new go to breakfast. 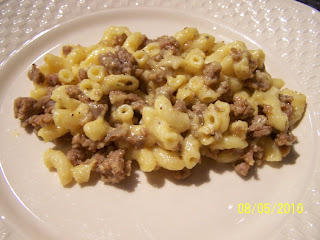 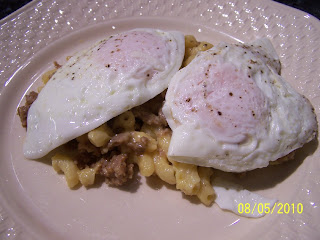 We both really like homemade pimento cheese, and just can't eat the store bought stuff, so Bev decided to make up a batch. She decided she would deviate from her normal ingredients and kick it up a little. She doesn’t have a recipe and just makes it to taste, but here are the ingredients:

She first tried a little in a bowl with slaw dressing, but it was sweeter than we like, so she stayed with mayo. The thing that made the big difference was the chipotle and I really liked the flavor, with a little heat, that it brought to the party - she just added until we both liked it. If you like pimento cheese and you like the chipotle flavor, this might be right up your alley. Another step toward expanding our culinary horizons.