County Ham For Supper And Breakfast

Bev has been craving country ham so we headed down to Benton’s County Ham the other day to fetch us some. I wish I could go down to the local dock and buy just off the boat seafood, or get fresh made sausages from the local butcher, etc, but Benton's is one of the little jewels of our area. I dare say, 90% of our population have never tasted old time country cured ham and bacon like they do it – it’s very different from Clifty Farms, Hormel, etc. She wanted to buy several slices and some ham hocks so after comparing prices we decided we’d just buy the whole ham. This way we’ll have plenty to use now, to freeze, and to give to the kids. The pretty center slices are further down in the pile. 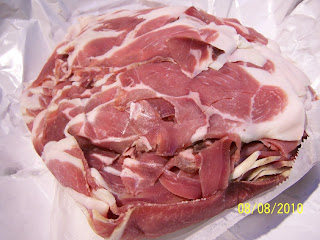 As we were discussing dinner, I told Bev I thought I had a plan, but she quickly advised she wanted ham biscuits. She had to twist my arm, but I finally agreed to garlic cheese biscuits and fried country ham. I always have it cut fairly thin, a heavy 1/16”, so it can be cooked quickly and remain soft and moist – too often, it’s cooked into something more like cardboard that can be held by one corner and will still stick straight out – not the way I like it. Since the virtual end of Trichinosis, I think all it needs is a good warming up. 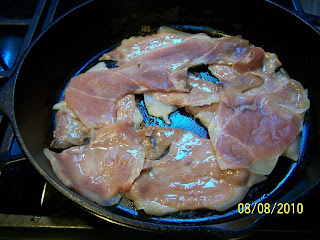 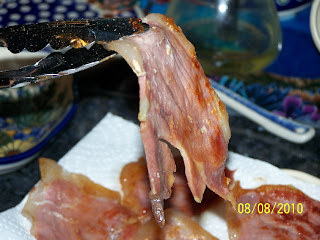 The finished plate of ham. 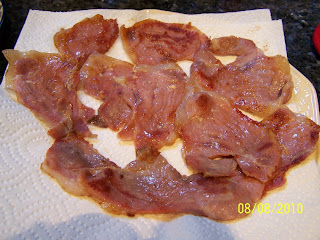 The garlic cheese biscuits were made with Bisquick using the following recipe.

Remove biscuits from oven and brush with margarine mixture while still on pan and sprinkle with parsley. 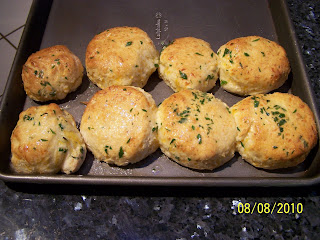 For the sandwich, it was the ham, a slice of tomato and some homemade chipotle pimento cheese – I think Bev's plan was a hit. 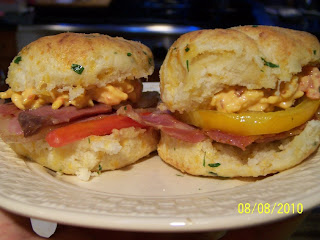 I topped a leftover biscuit with the gravy and sided it with a scramble using some of Bev’s homemade pimento cheese and a couple slices of ham. Gravy made with black coffee doesn't have a particularly pleasing color. 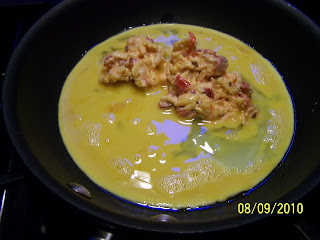 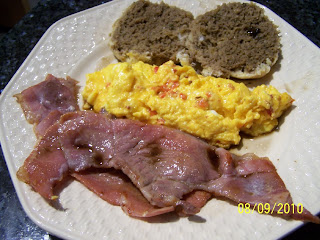 It was a delicious good ole fashion (except for the pimento cheese) country breakfast and I ate early so I was bolstered for another morning of doing battle with the Bradford Pear.