Cinco de Mayo – Any Excuse For a Party

I’m happy to know that I’m not the only person in the USA who will use any excuse for a party.  We Americans have taken a minor happening, in a foreign country, that pretty much ignores the event, and turned it into a reason to celebrate.


Per YahooNews, “here's what Cinco de Mayo has become in the U.S.: a celebration of all things Mexican, from mariachi music to sombreros, marked by schools, politicians and companies selling everything from beans to beer.


And here's what Cinco de Mayo is not, despite all the signs in bar windows inviting revelers to drink: It's not Mexico's Independence Day, and it's barely marked in Mexico, except in the state of Puebla, where the holiday is rooted in a complicated and short-lived 1862 military victory over the French.


Often mistaken for Mexican Independence Day (that's Sept. 16), Cinco de Mayo commemorates the 1862 Battle of Puebla between the victorious ragtag army of largely Mexican Indian soldiers against the invading French forces of Napoleon III. Mexican Americans, during the Chicano Movement of the 1970s, adopted the holiday for its David vs. Goliath storyline as motivation for civil rights struggles in Texas and California.”


I had a full day of Mexican dishes planned, but after three days of BBQing, I couldn’t get motivated to make breakfast and Bev really wanted to go out and eat, so she went online in search of a place to go.  She found Cinco Amigos in Lenoir City (also one in Cookeville, Tn)and it seemed perfect as it was on the way home for Wende, got high marks from food raters Urbanspoon & Knoxville City Search, and was a place we’d never been.


The restaurant is most of the first floor of the Day’s Inn and we found it to be warm and friendly with a very good wait staff - we went about 3:30 to avoid the crowd and make it easy to have a two-meal day. 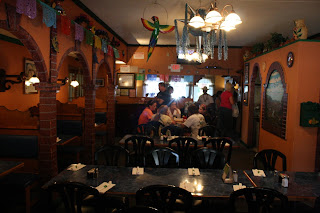 There were also a couple of young ladies giving away Jose Cuervo and they took a shot of us. 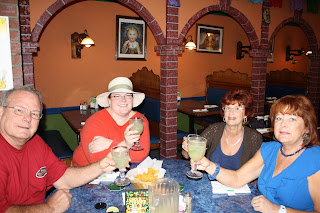 We began the meal with the usual chips and salsa and a pitcher of margaritas and we all liked each of the items – Bev especially bragged on the Ritas.  SIL, Pat, had two taquitos served with rice and beans - no shot of it.


Wende had Pollo Enquesado which was grilled chicken on a bed of rice and topped with queso blanco sauce.  She stuffed her tortillas like fajitas and said it was very good. 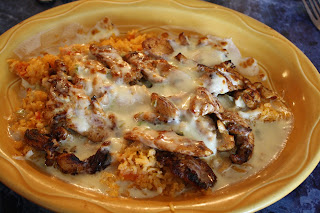 Bev had the full blown Cinco Amigo Combo with a chile relleno*, beef tostada, enchilada*, taco, burrito*, and taquito - it required two plates to hold it. 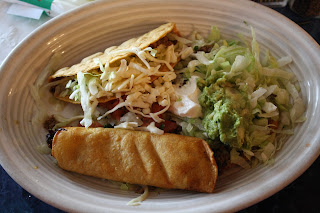 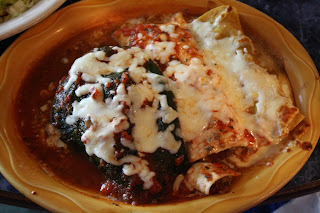 She usually buys the big meals so she can get two more meals at home from the leftovers, bringing home those with *. 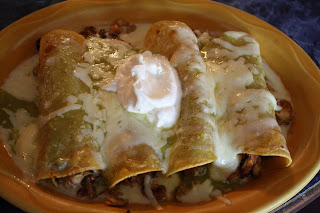 Everyone liked there meals and Bev said it may be her new favorite Mexican restaurant.  I enjoyed the flavors of mine but will get beef next time as the chicken in the stuffing was way too done for my taste – not totally unexpected.  I believe this was the first place I’ve eaten where every meal didn’t come with rice, beans, or both.


One year ago: A Little Trip To Rutledge, Tn & Blogger Party