A Veggie Meal From The Garden

We picked some beets the previous day, one of the few cheddar cauliflowers this day, and just prior to preparation I graveled (East TN speak for digging under the plant for the taters and replacing the dirt without disturbing the plants) enough new potatoes for the meal.

The beets were washed and boiled, then peeled, sliced, and served with just butter, S&P.

The potatoes got the usual treatment for our first harvest – washed, boiled until just tender, then fried in butter to brown.  Reminder - new potatoes aren't necessarily small and small potatoes aren't necessarily new.  Notice how a light washing removed some of the delicate skin from the new ones.  I was surprised at their large size since they have yet to bloom - hopefully we'll have a good crop. 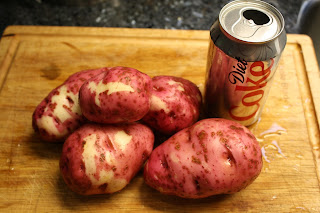 I only grow the colored cauliflower so I don’t have to worry about covering the head to keep it white and the cheddar color of this one added nicely to the Cauiflower Gratin I made from it. 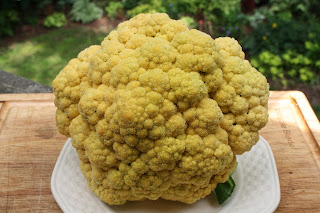 I had two recipes saved – one from Penny at Lake Lure Cottage Kitchen and one by Giada from the Food Network.  They both used Gruyere cheese and bacon and I liked elements from each of them, but I ultimately chose Penny’s because she said it was company worthy and it came from Ina Garten.  I went back to Ina’s original recipe and saw that it called for twice the cauliflower that I had so I cut things in half, added capers per Giada’s recipe and used a little more cheese.  Please check Penny’s site for her recipe and photos.

Note:  I like to do it this way as I made less mess and used the bacon pan for the sauce.

1. Preheat the oven to 350 degrees.
2. Cook the cauliflower florets in a large pot of boiling salted water for 5 to 6 minutes, until tender but still firm.  Drain and add to a large bowl.
3. While the cauliflower cooks, heat 1 tablespoon of the bacon fat in a medium saucepan over low heat.  Add the flour, stirring constantly for 2 minutes to make a blond roux.
4. Slowly whisk the hot milk into the roux and stir until it comes to a boil.  Boil, whisking constantly, for 1 minute, or until thickened.
5. Off the heat, add salt and pepper to taste, the capers, 2/3 cup of the Gruyere cheese and the Parmesan cheese.
6. Pour two thirds of the sauce over the cauliflower, along with the bacon, and carefully mix to coat the cauliflower with the sauce.
7. Pour the mixture into a greased 8x8x2-inch baking dish, scrapping out all of the sauce, and pour the remaining third of the sauce over the top.
8.Combine the breadcrumbs with the remaining Gruyere and sprinkle on top.
9. Melt the tablespoon of butter and drizzle over the gratin. 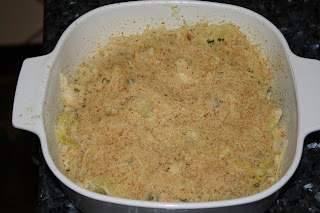 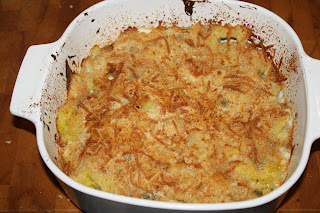 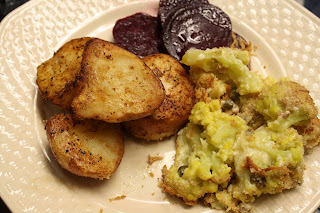 I’m not a big fan of cooked beets, but I can eat them, and these were about as good as buttered beets can be.  The potatoes were outstanding as usual and Bev and I both thought the cauliflower was company worthy, just as Penny said, except, we'd omit the capers next time.  Even the SIL, who doesn't care for cooked cauliflower, thought it was pretty good.  Thanks for the recipe Penny.

Two years ago:  None