For last year’s party we had a theme of Texas BBQ in East Tennessee and for this year we decided on an East Tennessee Cajun cook out.  We had decided to hold it earlier in the year so it wouldn’t be as hot but the Mother Nature must have heard it was a Cajun fest and delivered some South Louisiana weather – mid 90’s, but it was comfortable on the dock.


Last year Robyn Medlin won the furthest distance traveled award and this year it goes to Dave and Jackie Scott (My Year On The Grill) who came in from Kansas City, KS just for the party - is that cool or what.  In addition to the Scott’s, the blogging attendees were:


And the folks who showed up just because they heard there was a party at Almost Heaven South were:


With 25 folks, we pretty well maxed out the dock - I've been wandering about the limit - maybe 30.


The Hoffer’s and Klett’s bunked with us and the Scott’s stayed with the Groves' – one more bedroom and the out-of-towners could have all stayed here at the Almost Heaven South B&B.


Chris, Dave Scott, and the Aucoin’s got to the lake between 9 and 10 to get the cooking started and the rest of the guests began showing up around noon.  While dinner was cooking, we enjoyed several delicious appetizers provided by the guests and some glazed nuts graciously sent to us by the Cathy Farley at the Wives With Knives blog & her Bavarian Nut Co. near Portland, OR - thank you Cathy, they were a hit.


As usual, I spent too much time hosting and having a good time to get many shots but several of the bloggers took photos and are posting, so please visit their blogs (links above) for the rest of the story.  Here’s the dock set up with Dave and Chris to the left. 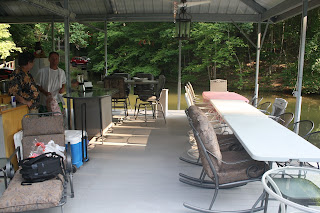 This is dinner to be and it’s a shame so much of him is inedible. 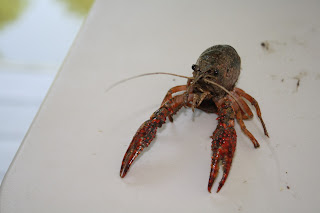 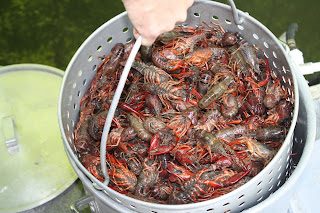 Chris brought the veggies and prepped them and the Aucoin’s brought the crawfish and shrimp and A.J. did the cooking in a giant pot and all I can say is thank you, thank you, thank you.  He definitely knows how to do this and it was all outstanding. Also, a big thank you to those who brought something, Chris and Katherine for co-hosting, and to everyone for just taking the time to come share a piece of your life with us.This is the kitchen with Executive Chef A.J. in action. 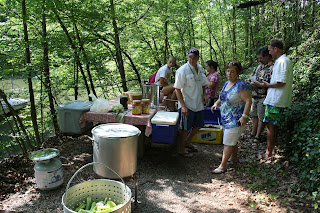 Here we are digging in. 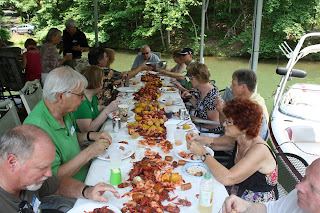 Bev showing how to do it. 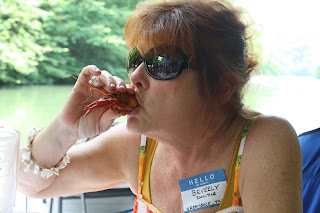 After eating, we took down the tables and sat around visiting into the early evening, getting to know those we hadn’t met and catching up with those we had.  Jim Warren came by boat and he took folks on a boat ride around the lake and turned a couple of them into water skiers.  We wrapped up the day with a twilight cruise on the pontoon boat.


As we spent the week getting everything ready, I was thinking to myself that I wasn’t sure I wanted to do this again, but I had an absolutely super time and am now looking forward to next year and I'm sure Katherine, Chris and I are open to theme suggestions.


One year ago: A Different Slaw For The Dock Party