This was my normal BBQ day with the addition of a couple of new items – smoked Santa Fe Chile peppers and stuffed baby back ribs.  The peppers were pretty basic as I used the same mixture as the larger peppers - some were whole and some were halved and wrapped in store bought bacon for ABT’s (Benton’s bacon would likely over-power them).


This is the before shot of them. 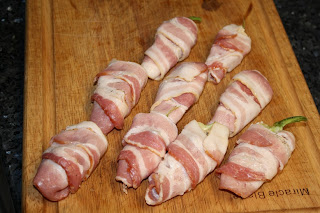 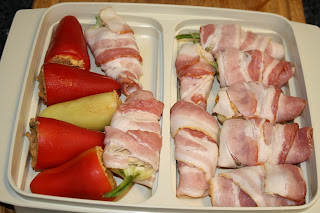 I cooked the bare ones in a rack that allowed them to stand upright.
Back in mid-August Ann over at Thibeault’s Table posted pictures and a recipe for stuffed pork ribs and I immediately filed it away for BBQ day.  She stuffed hers with a traditional sage bread stuffing and baked them in the oven and they looked terrific.
I decided to go with my usual rib flavors using Head Country Seasoning and glazing with Pioneer Woman’s BBQ Sauce and Bev suggested using Stove Top Pork Stuffing, so we gave it a try.  I had a lot going on and didn’t get a before shot but I used nearly all of two boxes of stuffing.
Knowing they would take longer to cook than normal ribs, I kept the stuffing hot before adding to the ribs and cooked them in the hotter part of the smoker and I flipped them twice during the cook - thicker slab on the bottom twice.  I monitored the internal temperature of the stuffing, glazed them at 165* and pulled them at 170* - this was at 6 hours and the ribs needed a little more time, so next time I'll monitor the meat and go to 185* and allow 8 hours at a smoker temp of 230*. 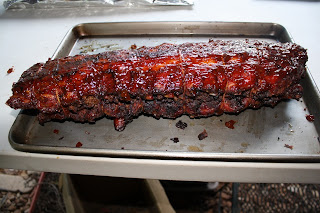 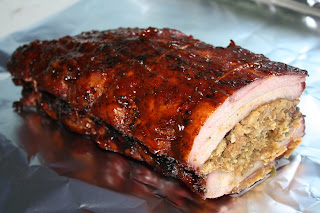 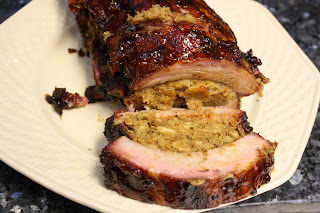 Friends, Dave and Laurie, were here to pick up their BBQ and sampled the ribs and peppers and they did a little oohing and aahing – always a good sign.  The preferred pepper was with chorizo.  Next time, and there will definitely be a next time, I’ll make a stuffing that has flavors to match up with the rub and add some type of sausage.  Thanks Ann for the great idea.
All photos can be enlarged by clicking on them.
Have a great day and thanks for stopping by Almost Heaven South.
One year ago: Tomato Clafoutis – Sorta
Two years ago: A Rainy Day In Tennessee
Larry
Posted by Big Dude at 4:54 AM