After our first trip to Fall Creek Falls State Park with our neighbors, who are experienced RVer’s, we decided we were ready to go it alone.  The main difference this time was SIL, Pat, and her dog, Willie, went along with us so we could test how things worked with three of us and how well Willie would do being left in the camper – all went well.

Before we left I snapped some shots of Bev’s flowers around the rock in our driveway including the sedum in the header shot. 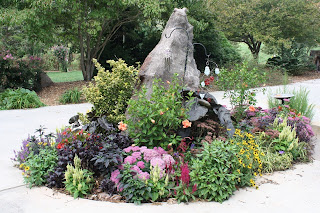 We just went to a campground near Crossville, about a 1½ hour drive, with plans to look around the area while we were there.  We drove over to Crossville Thursday afternoon and got settled into the campground. 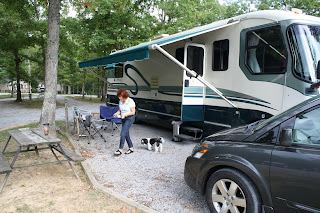 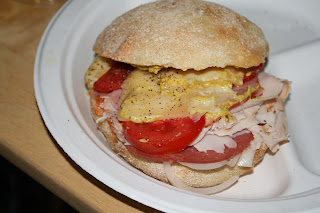 On Friday, we headed north to the Big South Fork National River and Recreation Area (BSF).  On our way there, we stopped in Jamestown , which is known for being a home of Mark Twain’s father, and WWI hero, Sgt. Alvin York grew up just North of there.  We stopped at Highland Manor Winery (Tennessee's oldest) for some of their delicious, fruity wine, which we've been buying for many, many years. 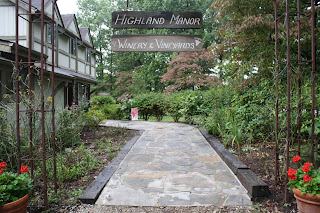 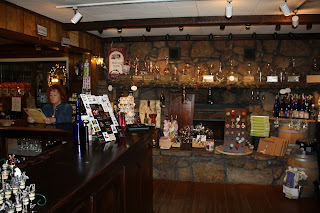 Then we stopped at the small, very nice, mom and pop (literally) Mac's Diner for lunches of catfish, patty melt, and lemon pepper chicken.  I forgot pictures, but we stumbled into the perfect place with Pop doing the seating, serving, busing, and collecting, while Mom doing the cooking.  Including drinks the bill was a ridiculously low $19, so I left a $10 tip to make it feel fairer to me - be sure to stop by when in that area.  Bev also bought this cute apron made from a pair of overalls from their little gift area.  She did one pose without a top but alas, the denim wasn't quite wide enough - but I sure enjoyed it. 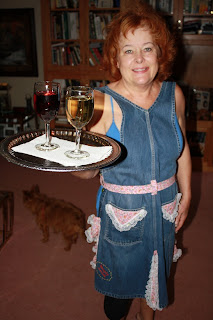 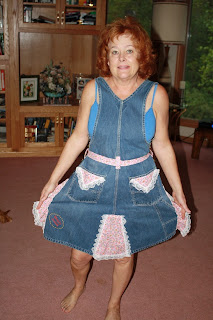 We were up near the Kentucky border and there were several beautiful horse farms. 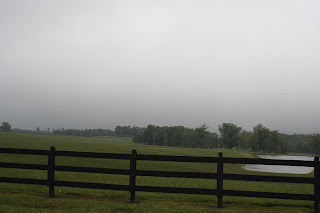 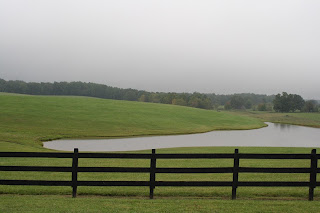 The BSF came about by act of Congress in 1974, with the help on Senator Howard Baker who grew up in the area.  According to the Park Ranger, it was done in large part to protect the wild river and its gorge from TVA’s dam building appetite – it is the Big South Fork of The Cumberland River, which has ten dams on it and its other tributaries.


While it was a misty day for the entire trip, it was still a pleasant drive, especially since I’d wanted to go to the BSF for many years.  We basically just drove though the main Tennessee part (there’s another in Kentucky), stopped at the visitor center for a chat with the ranger, and walked down to the gorge overlook.  This is the river from the auto bridge with the foot bridge below. 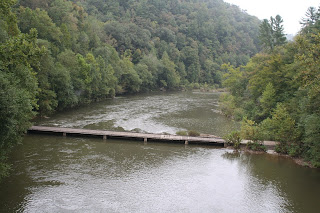 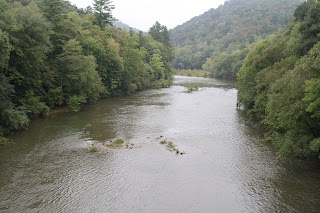 And the gorge from the overlook. 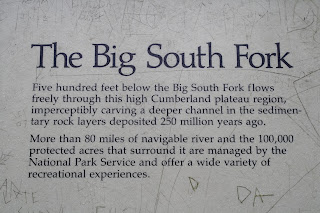 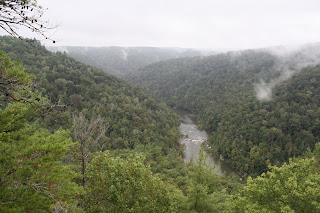 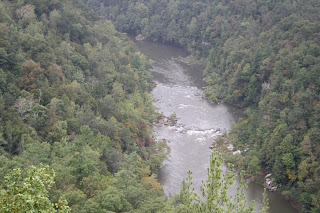 One tidbit I learned was all installations under the Park Service are equal whether they are called a park, an area, a scenic river or whatever and the designation is to describe their function and restrictions.  The second tidbit is the park service is under the Dept. of Interior and the national forests are under the Dept. of Agriculture.  The third plus for visiting with the ranger is I now have my $10 lifetime pass that gains me and my family entrance into all fee areas run by the park service – there are a few minor advantages to being old.


Bev and Pat ended the day with dinner at a nearby restaurant called the Brass Lantern and said it was very good, but I just piled up for the evening in the RV with the dogs.
All photos can be enlarged by clicking on them.
Have a great day and thanks for stopping by Almost Heaven South.
One year ago:  Gator Po' Boys
Two years ago: The Humble Hot Dog - Hard To Beat
Larry
Posted by Big Dude at 4:05 AM