In an effort to get out and do more, Bev, the two small dogs, and I took a day trip up to Roan Mountain State Park, because we’d never been there and wanted to check out the park campground for RV suitability.  The park is located between the town of Roan Mountain and the base of Roan Mountain (kinda confusing huh?) in upper East Tennessee near the North Carolina Border – which is at the top of the mountain.  I’m normally a-get-to-the-end-point rather than enjoy-the-journey type of person, but I’m working to change that as well, so we took the non-interstate route up.  We traveled the old highways going thru Sevierville, Newport, Greeneville (for a lunch stop), and Johnson City.


We watch a local PBS show called “90 miles with Chef Garrett”, where Knoxville restaurant owner and chef, Garrett Scanlon, travels around the area within 90 miles of Knoxville visiting restaurants, farms, farmers markets, and other food suppliers.  One of his stops was at a little place in Greeneville, called Tipton’s Café (since 1966) and since Bev and I had never been to Greeneville, we decided to stop off for lunch.  Talk about your hole-in-the-wall, this place was no more than 12’ wide and with the cooking area along one wall, the service counter with stools in the middle, and 2 small tables on the other wall, there was barely room to get through – I wish I’d remember the camera.
Chef Garrett had been there for breakfast and it had high on-line ratings, but we were there for lunch.  The only lunch special on Friday was pinto beans and cornbread (fortunately un-sweetened), which I ordered with chopped onion of course, Bev had a hamburger, and we split a homemade banana pudding.  We were plenty full and everything was very good, but I wish I’d asked if they served breakfast all day – my favorite food you know.  With a Coke, a giant iced tea, and sales tax, the bill was a whopping $10 – what a great value for the food we had.
Shortly after leaving Greenville, we saw a sign for the Davy Crockett Birth Place State Park (there is also a Davy Crockett State Park) and decided to have a look - with two state parks, one might think ole Davy is a favored son here in Tennessee.  It’s a small, but nice, state park in a beautiful location along the Nolichucky River. 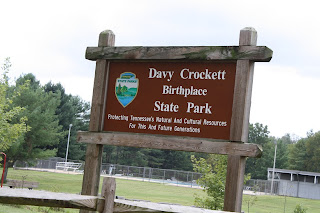 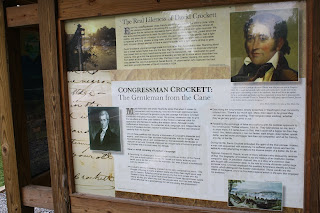 I don’t know if this is the original cabin or the exact location, but if it is I can see why they settled in this valley along the river, but high enough to be above the flood plain.  We’ve come alone way in 250 years. 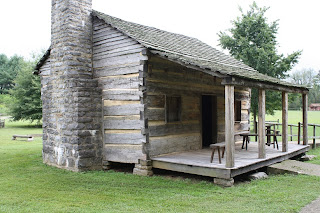 The lower level about 15’ below the cabin. 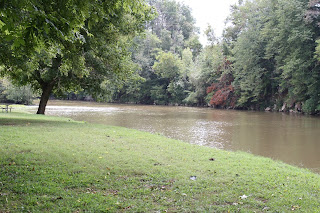 A typical East Tennessee barn along the way. 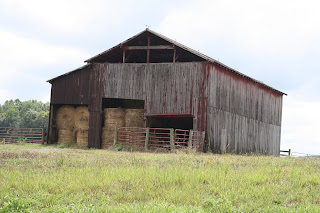 It was an overcast day and we knew we might be inhibited by the weather but we went anyway.  The Roan Mountain State Park was nice and the campground could accommodate the RV and we decided while we were there, we needed to drive to the top of 6200’ Roan Mountain .  On the way up, we could see the cloud we were about to drive into. 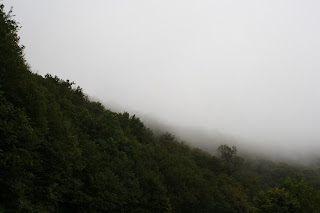 And we took a shot under it to the valley below. 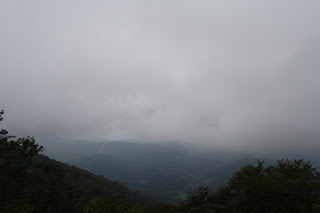 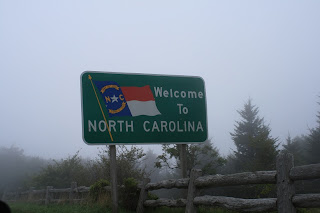 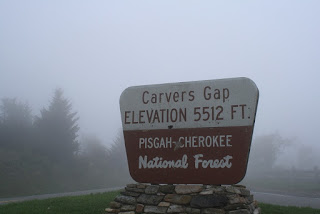 Then we drove on up to the famous rhododendron gardens where we found the parking lot empty – not surprising for 5pm on a foggy Friday. 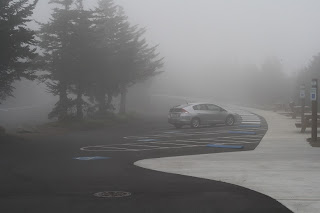 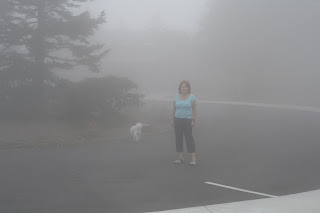 These are some of the rhodys on the way out to the site of the former Cloudland Hotel – hard to believe this place was famous in the late 1880’s. 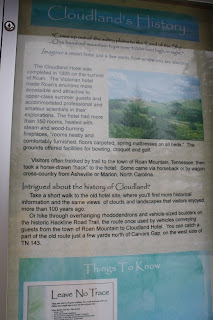 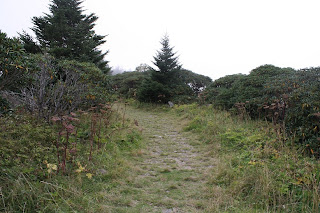 There were also a lot of sumacs (we think) in fruiting stage. 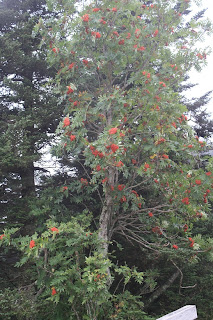 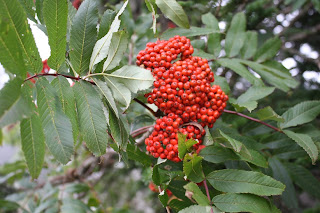 And on the way back down, there was a little break in the clouds for a shot of the valley on the other side of the mountain. 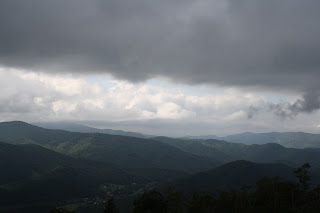 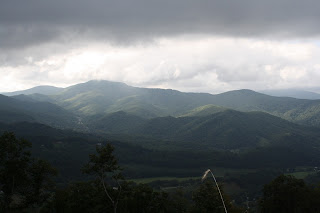 Now that we’ve checked everything out, we are thinking of a trip up for camping the week prior to the Rhododendron Festival next June.  It was a nice day, but it took us 10½ hours – about 5½ to drive up and 3 to drive back – it’s easy to see why Ike thought interstates were a good idea.
The Blue Ridge/ Smoky Mountains are just a beautiful part of the world and I’d love to have a time machine so I could see them about 1600.
All photos can be enlarged by clicking on them.
Have a great day and thanks for stopping by Almost Heaven South.
One year ago:  New Orleans Trip – Day Five, Tabasco
Two years ago:  Roadside Chicken
Larry
Posted by Big Dude at 4:28 AM