A Little Day trip To Chattanooga

Friends, Dave and Laurie, had suggested we go out for a birthday dinner, but it was the next week before we could make it happen and rather than just a meal we decided on a little day trip.  I suggested we make our old rounds on Benton’s Country Hams, Tennessee Valley Winery, Sweetwater Valley Farm (for Cheese) and Monterrey Mushrooms and Bev mentioned she’d been wanting to go to the Bluff View Art District in Chattanooga.  So we decided to start with Bluff View and hit the others on the way home.


It was about 12:30pm when we got there and decided to start with a visit to the Bluff View Bakery since we were parked around the corner.  They are actually a wholesale operation supplying local restaurants and a grocery store chain, but they have a very small retail area in the front.  Everything looked good and we ended up with a loaf of jalapeno cheese boule, a bag of ciabatta rolls, and a cranberry walnut treat (can’t remember what it was called but perhaps a boule as well).
Then it was off to lunch at Tony's Pasta Shop & Trattoria. 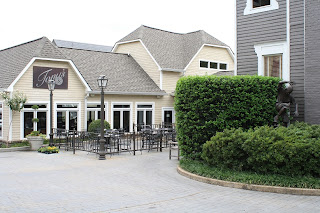 We were very impressed with the menu and the fact that they made their own pasta and sausage.  I began with the requisite Italian beer. 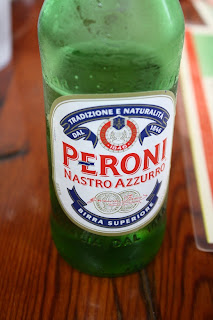 This was followed by our first ever breaded and fried salmon as an appetizer, bread with parmesan laced olive oil, and my entrée of Low Country Linguine - "Sautéed crawfish and mushrooms in creamy Cajun alfredo sauce, tossed with house-made black pepper linguine" - and a side of their meatballs. 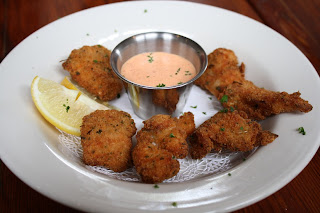 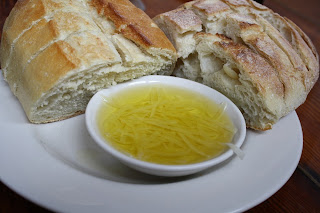 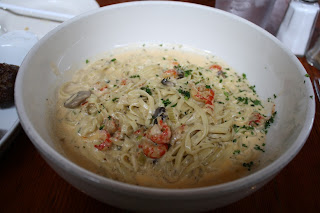 I enjoyed everything and would definitely go back - check out Big Daddy Dave’s blog on Saturday for a full report on the restaurant.


After lunch, It was a visit to Rembrandt's Coffee House for some truffles and the ladies browsed the River Gallery to check out their collection of "regional, national, and international fine art and crafts" - I enjoyed lounging in the courtyard. 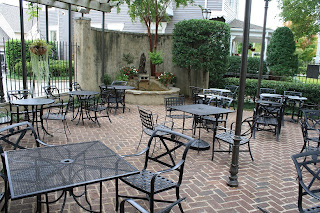 We walked over past the Hunter Museum Of American Art for a view of the river. It is contained in this antebellum mansion and the very modern structure beside it. 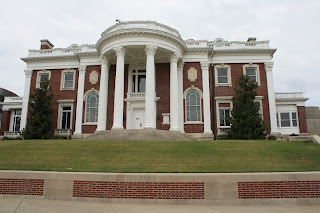 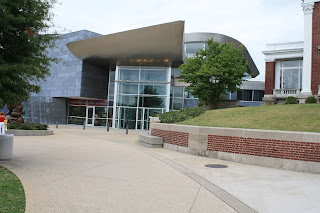 On the way to the overlook, we came upon this feller standing outside.  I couldn’t help but be impressed with the driftwood construction but wondered how long it would last, until I read about it.  It is made of cast bronze and covered with a patina such that it looks and feels like wood.  At this point the engineer in me took over, as I thought thru how they would build the molds, cast the bronze pieces and assemble everything – at this point I moved from impressed to in awe. 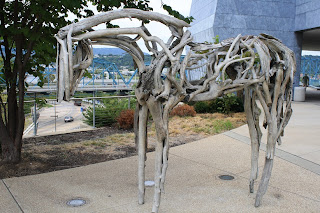 Here’ my trip mates with the Tennessee River behind 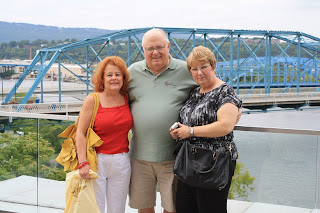 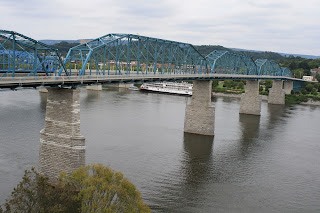 and this glass bridge crosses a highway to go between the Bluff and a newer downtown housing area. 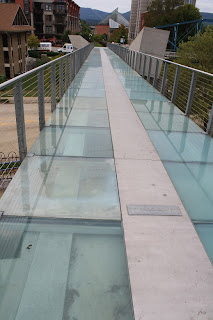 We then headed North and stopped at the cheese factory to stock up on some of their 26+ cheeses and got a fried curd demo and sample – they were delicious.  Most of their milk goes to Mayfield’s with the extra that the cows produce in the late winter and spring months used to make the cheese.  They are big time dairy with a 1000 cow herd and the cheese operation has continued to grow since our first visit eleven years ago – they had about 10 varieties.


We skipped the winery and stopped by the mushroom factory where the guard house has a fridge stocked with two pound bags of fresh cut white button shrooms.  While the price has doubled over the past 10 years, it’s still only $4 for the two pound bag.  As for the size, they are what they are picking that day and are sometimes little and sometimes big enough to stuff like these were – you know they’re fresh when the cut is still white. 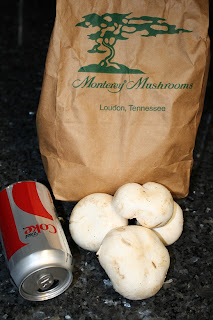 After the big lunch it was a slice each of the jalapeno cheese bread and the sweet roll for supper.  They were both outstanding with the sweet being similar to a scone and we both decided it would be worth the occasional 2 hour drive just for the bread. 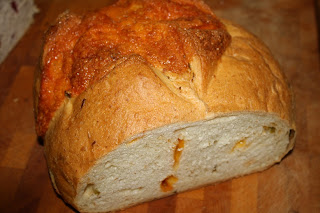 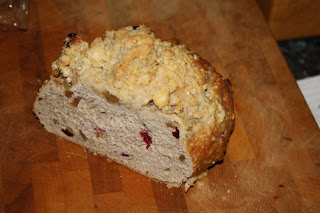 All photos can be enlarged by clicking on them.
Have a great day and thanks for stopping by Almost Heaven South.
One year ago: A Little Visit To My Hometown
Two years ago:  I Love Breakfast
Larry
Posted by Big Dude at 4:25 AM